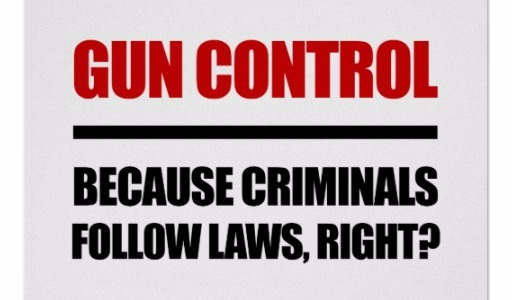 This country is facing very controversial topics in today's society. One issue you should look into is the issue of gun control. In 1911, Turkey established gun control. From 1915 to 1917, 1.5 million Armenians, unable to defend themselves, were exterminated. In 1939, Germany established gun control. From 1939 to 1945, six million Jews and seven million others unable to defend themselves were exterminated. Chicago has gun control and they have one of the highest crime rates America. Taking away innocent peoples guns will not stop the killers from getting their hands on them. More gun control will not solve America's “gun problem”, it will only make us defenseless.

Many people assume that taking away people's guns, or making them harder to obtain, will solve America's gun problem. However, when we look at how much crime rate has decreased over the past decades, we also see that gun ownership has increased. According to statistics, every year, guns are used over 80 times more often to protect a life than to take one(http://americangunfacts.com/)!

Pro gun control people believe that adding more laws to guns will solve America's gun problem. They think that just because laws are enforced, that it will stop criminals from creating a black market. Cocaine, heroine, and other drugs are illegal also, but that doesn't stop a criminal from obtaining them. A Nov. 26, 2013 study found that, between 1980 and 2009, "assault weapons bans did not significantly affect murder rates at the state level" and "states with restrictions on the carring of concealed weapons had higher gun-related murders”(http://gun-control.procon.org/). Like the saying goes, if guns are outlawed, only outlaws will have guns.

The way that we can solve the gun problems we have is to perform complex background checks when people want to purchase a firearm. Very detailed laws should be put in place, such as anyone who has committed a crime with a firearm involved, should not be able to purchase a firearm. Doing so will prevent any crime seeking people from getting their hands on these weapons. Another possibility would be to make guns more difficult to obtain. Pro gun control people believe that obtaining guns are too easy in today's world. This is partially true, however, guns have a lot of requirements as it is, but it varies from state-to-state. Some states do not even require a permit to obtain a firearm, and this definitely needs to be changed(https://www.nraila.org/gun-laws/).

After everything I have stated in this letter, I hope you will consider looking into this subject, and maybe make some changes. Me, along with a lot of other people, believe that gun control is a big problem in today's society. With all of the positive, and negative changes that guns can produce, I really hope you study it well, and make the right decision. Thank you for taking the time to read this, and I look forward to seeing you make a change.

gun issues
Published on Oct 23, 2016
Report a problem... When should you flag content? If the user is making personal attacks, using profanity or harassing someone, please flag this content as inappropriate. We encourage different opinions, respectfully presented, as an exercise in free speech.
Orange High School

People should get gun control.

Gun Control is strict enough as it is and it doesn't need to be even more strict, it should stay how it is.