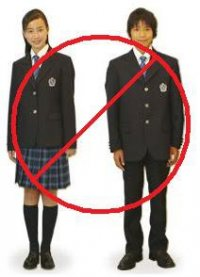 “Bullying will stop for good if we wear uniforms and we all look the same so there will be nothing to bully about.” That is wrong, people do not need to wear uniforms just because they get bullied. They should be able to wear what they want and express themselves. Uniforms would help just a tiny bit because it's not just clothes that people get bullied for. Bullying is not the only reason they want kids to wear uniforms because they say it will “make kids feel more comfortable and feel like they fit in” which makes no sense because clothes maybe a tiny part of how you fit in but you should be able to wear what you want and fit in with the people you like to be with, the people you hang out with is based on who you are as a person.

Uniforms are just a little part to bullying, Clothes are not the only thing people get bullied for, they get bullied for who they are as a person. Uniforms may help a little bit but on a site called (procon.org) a man named Tony Volk said it might increase bullying instead of decrease, he said in 2007 peer-reviewed study found that "school uniforms increased the average number of assaults by about 14 per year in the most violent schools." Which exactly shows what I’m trying to prove. It also reduces the way you express yourself, sometimes you can not express how you feel when you can not dress the way you like, some days you can express you are lazy and do not want to do anything if you wear gym clothes or sweatpants, or maybe you just want to show you want to relax and be comfortable. Most people like to show who they really are and get ready with the clothes they like to wear and the clothes they pick because they would like to express how they really feel that day. Before uniforms we need better education, instead of spending so much money on uniforms we should pay for a better education because we need a better system to have a good career which will actually help us out later on other than having uniforms. We would be wasting money on uniforms when we could buy all new textbooks for education so students could be able to study easier and learn more.

The solutions I have to fix the problem of why students should not have to wear uniforms are we could just not waste the money and not buy the uniforms instead we can save the money for better text books and to get more classes added to the school instead of wasting it on uniforms. We should get a better education other than uniforms because we can use the money so we can have better schooling. We could save the money for a bigger and better investment that will help in the long run.

education bullying
Published on Oct 23, 2016
Report a problem... When should you flag content? If the user is making personal attacks, using profanity or harassing someone, please flag this content as inappropriate. We encourage different opinions, respectfully presented, as an exercise in free speech.
Orange High School

Standardized tests have always been a way to compare students, they are an unfair way to judge the abilities of an individual and are not worth the...

The importance of education

Education is the most important thing in our society, and it needs to be made a focus.

The Growing Price of a College Degree.

Why college tuition should be more affordable.