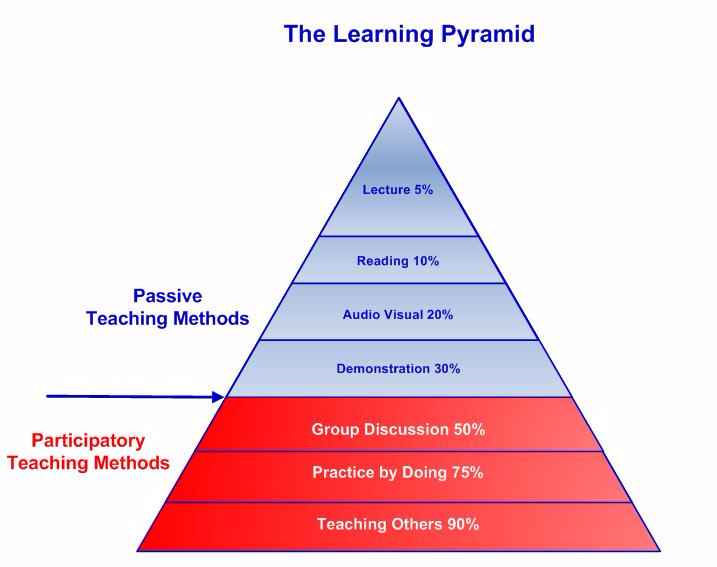 This is what I like to call, the learning pyramid. Researched and created by the National Training Laboratories in Betel, Maine, this illustrates how a learner recalls the information they learn in various scenarios. By looking at the pyramid it's obvious that passive teaching methods are nowhere near the effectiveness of participatory teaching methods, but for some reason we don't truly enforce the idea that as teachers they should be teaching students in a more participation manner. We encourage it, but we can't truly enforce the ideology because of the many old practices we still incorporate into the everyday school life, early morning 7-8 hour day schedules is one of the many problems that affect the ideology, forty-five minutes to an hour-thirty minutes (when taking in the amount of time that's required to switch between classes and settle down) is not enough time for our teachers to give us the active type of lessons that students should be getting. It's a lot easier to open up a text book, which most are severly outdated, and just go from there.

Standarizing testing is also at fault here, it's alright to have tests that are able to make the student think critically and test their ability to do well in school, but having multiple, not one, tests that are most of the time mandatory to pass in order to go forward is not how it should be practiced. All this does is force the student and the teacher to worry way more than they should, and when people worry they make mistakes we're humans that's just how we act when under pressure. We rush through multiple lessons and chapters just to be 75% ready for when the important tests come because there's just not enough time to teach everything especially if students are just reading from a book. Luckily for myself, my teachers are able to bring in a lot of fun active lessons into the class, but everytime the problem of lack of time always shows itself. We end up rushing and before we know it we either miss something or just don't have enough time and we fall behind in the "standarized schedule". There's no real way to say this without coming off as rude, but the requirement to become a teacher seems to be extremely low because some of the teachers I've seen just have no idea what they're doing, yet we allow them to teach the future leaders of America. In order for us, as students, to change we need the teachers to change also. There is a serious lack of teacher innovation, but the teachers can't be the only ones to be blamed when they're forced to such a tight schedule and format.

Schools are overcrowded, low-scoring schools every year are shut down. The influx of students, and the babying of these students over the years have killed words such as gifted or talented and because of this competition has died an ungraceful death. Competition has caused evolution many times there's no reason to get rid of it in a school enviorment to make others feel better about themselves that's not how we get better. Students need to know when they're average or below others it gives them the boost they need to strive to get better.

Students are the future leaders of America, but for the most part students still live in an outdated form of education. The future will never change unless we act now and change the present.

Thank you for reviewing this letter

education
Published on Oct 21, 2016
Report a problem... When should you flag content? If the user is making personal attacks, using profanity or harassing someone, please flag this content as inappropriate. We encourage different opinions, respectfully presented, as an exercise in free speech.
Mourning Senior High School

The White House. 1600 Pennsylvania Avenue NW. Washington, DC 20500 I am a resident of Sunny Isles Beach, FL, and I am writing this letter becaus...

costs to pursue a education should be lowered or taken away

AT SCHOOL, Many teens decide that education is not needed in their life due to the fact that they won’t be attending college, but little do they kn...

This letter to the president includes my ideas on changes in education such as testing/diagnostics, Common Core, and states having power to make de...