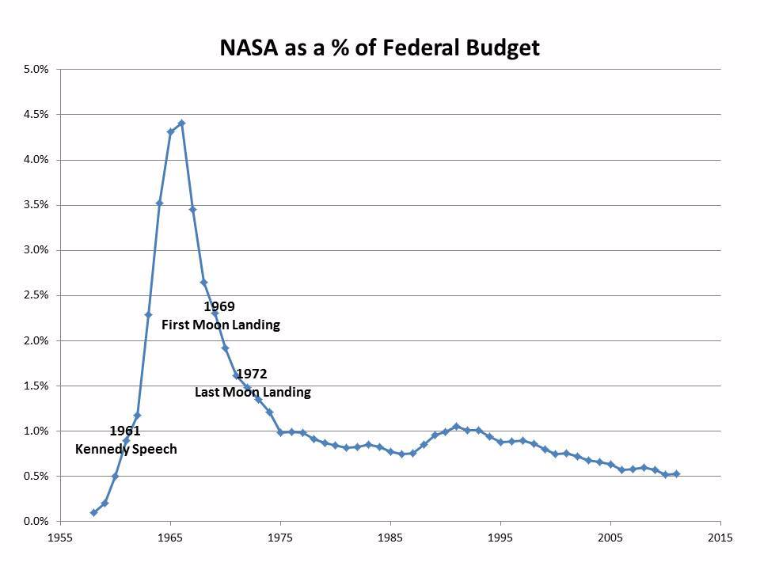 I would like to congratulate you for winning this year’s presidential election. It is not a simple task to achieve but you’ve been able to do it. My name is Kevin Fontaine, I am currently a 12th grade student from Alonzo and Tracy Mourning High School down in North Miami Beach, Florida and I would like to inform, and talk to you about the underfunding that NASA has received after the final moon landing was accomplished.

The race to the moon against the USSR made the federal budget of NASA skyrocket in the 1960s, with it almost reaching 4.5% in 1966. As shown by the graph, the percentage of the Federal Budget that is given to NASA throughout a year has been decreasing since the 1990s. NASA is currently around 1/10th of the budget from 1966, reaching a low not seen since 1960.

Why is this important you may ask? Well with these cuts to budget, come the cuts of employment from NASA. Thousands of Americans lost their position at NASA throughout the last 50 years.Back in 1966, around 420,00 people worked for NASA directly and indirectly. The current number of NASA employees is a mere 18,000 individuals, that’s a 95% decrease in staff from 1966. Along with the lost of employment comes the lost of technological breakthroughs given by NASA. Below is a small list of inventions NASA created, that were eventually given to the public:

Many issues need to be dealt with, but I believe the ongoing expansion of our understanding of the universe and our technology is key to furthering mankind into the future. We must continue to grow and evolve together. Thank you sincerely for taking time out of your day to read my letter.

nasa budget cuts
Published on Oct 24, 2016
Report a problem... When should you flag content? If the user is making personal attacks, using profanity or harassing someone, please flag this content as inappropriate. We encourage different opinions, respectfully presented, as an exercise in free speech.
Mourning Senior High School

This is a letter to our next presumptuous President, Hillary Rodham Clinton.

Student debt is too high

Since the end of the space race, funds for NASA have been declining resulting in delayed research, innovations, and voyages.

NASA may have a lot of funding. However, missions take a very long time to even start working on.

Advancing space exploration is a problem that not many people are talking about.

Dear Mr./Ms. President, I hope you read my letter and make a few changes on school budget cuts.