There are a lot of women's issues that have been around for a while, but no actions have been taken. Many women feel threatened by the lack off actions. Women do not wish to fear when they go out. Women wish for a fair and safe place. We know it will take a long time but we are willing to wait for it if it means safety.

Women have many things to fight for. Women are almost always blamed if something happens to them. Why couldn’t they prevent it? Why was she wearing those types of clothes? Or a mere “She was asking for it.” The case I’m asking for actions on is marital rape. I’m not married or will be any time soon, but my mom was with her previous spouse. A woman might marry a man out of love or because, if they don’t they will bring disgrace to the family. Some parents, out of tradition, will marry their daughter to a man they think is right for, however they don’t know the truth of that man.

Out of 100 victims of marital rape, only nine reported their husbands (ncjrs.gov). The majority of women who are physically assaulted by an intimate partner have also been sexually assaulted by that same person. 3 out of 4 cases of sexual assaults are committed by someone known to the victim, which furthers my point that marital rape is as bad as “common” rape. A national study done in 1997 found that 34% of women were victims of rape by their husband (Campbell, 1989). Canadian researchers estimated that over 7 million women reported being raped by their intimate partner, they believe it could be much higher (Mahoney, Williams & West, 2001).

A man could say that a women’s duty is to please him, and 43% of women actually believe it and have unwanted sex with their spouse (womenslaws.org). As women we are made to carry a heavy burden. What some women don’t know is how much we carry is up to us. Just because you marry a man doesn’t mean all your boundaries go out the door. A husband should still respect his wife and her decisions. If a man is able to abuse his wife, then what’s stopping him from raping her. Rape is more commonly done towards people the predator knows. So why is it hard for people to understand rape is rape. Marital rape is not any less than “common” rape. Please take some time to think over this matter. This could happen to anyone. 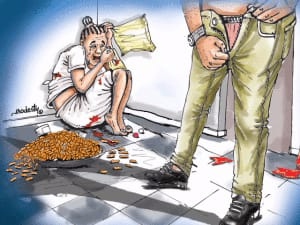 domestic abuse rape abuse women's rights
Published on Oct 20, 2016
Report a problem... When should you flag content? If the user is making personal attacks, using profanity or harassing someone, please flag this content as inappropriate. We encourage different opinions, respectfully presented, as an exercise in free speech.
Oxford High School

The government should not choose whether or not you have a child.

Lately, sexual assaulters have been getting less and less time in jail, or they have not gotten acceptable punishments for their crime