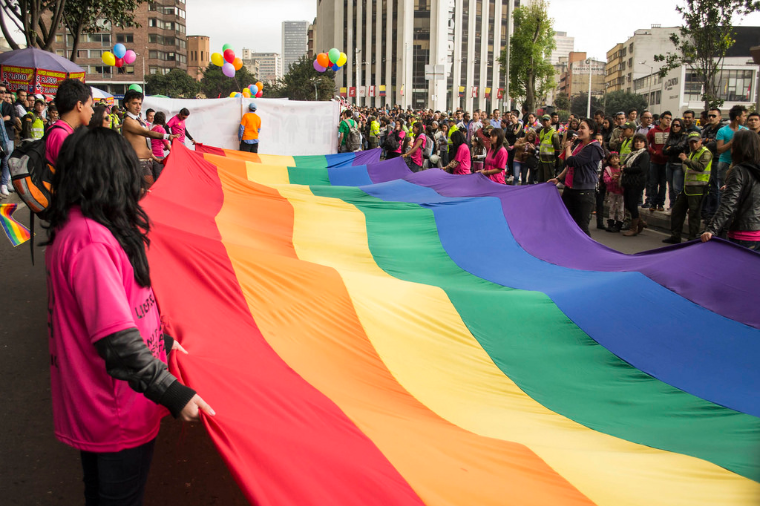 In late June of 2015, hundreds of people dressed in bright colors surrounded the Supreme Court, anxiously awaiting a verdict that would change their lives. Allies, closeted and uncloseted, people of every gender and sexuality celebrated in every corner of the U.S when rainbow lights shone into the sky. Everyone in that happy crowd is now vulnerable to discrimination, harassment and unequal treatment simply because of who they are and many states are failing to protect their LGBT+ citizens from it. The legalization of same-sex marriage was a big step for us, but this country needs to do more to be truly equal. The U.S needs to do more and work harder to protect their LGBT citizens.

Gay and LGBT rights are a controversial topic in all corners of the globe. In seven different countries, just being gay is punishable by death. Russia fines anyone who gives information on homosexuality to people under 18. According to BBC News, Nigeria recently added to their law against all gay relationships by also banning same-sex marriage, gay groups and public affection between same-sex couples. It is scary to be part of this community of love in all countries, for this fear and hatred of same-sex love is everywhere in the world. I hope that you, my president, will do as much as you can to reduce the fear that comes with being part of the LGBT community in America.

It has been just over a year since that fateful, rainbow-tinted day. In that year, over 123,000 same-sex couples got married. In that same year, 83% of all LGBT+ kids were verbally bullied. 40% of those kids report the bullying turning physical and 19% are additionally physically assaulted at school because of their sexuality. Michael Friedman of Psychology Today reports, “The bullying can be so intense that 30 percent of LGBT children miss school because they feel unsafe. Further, bullying because of sexual orientation results in increased depression, and an almost six-fold increased risk for suicide attempts.” There are children being bullied simply because of who they love and there is nothing being done about it.

The discrimination against people who are not both straight and cisgendered doesn’t end with school. Even in the job market and environment, being LGBT is already a disadvantage. The Civil Rights Act of 1964 protects discrimination against race, sex, nation of origin, color or religion but does not protect gender expression or sexual orientation. In the article “The Psychological Impact of LGBT Discrimination,” Ph.D Michael Friedman observes, “One experimental study sent 1,769 pairs of fictitious résumés in response to job postings across seven states. One résumé in each pair was randomly assigned experience in a gay campus organization, and the other résumé was assigned a control organization. Applicants affiliated with a gay organization were 40 percent less likely to be called for an interview.” This means that just mentioning that you are associated with an organization that supports LGBT people already puts you at a disadvantage for getting a job.

Once in the workplace environment, not much gets better. 42% of LGBT adults in a workplace environment experience discrimination and the rate of openly gay worker discrimination is four times that of a closeted gay worker. Furthermore, LGBT adults who have experienced discrimination at work have higher levels of health and psychological problems than those who have not. More discrimination at work can translate to the person’s mental health, with lower job satisfaction, more contemplation of quitting and more days absent. There are hundreds of stories about people revealing the fact that they are in a same-sex relationship to coworkers and being fired shortly after. Executive director Rea Carey of the National LGBTQ Task Force says, “The vision for society, in addition to legal equality, is lived freedom. You should not be fired from your job just because of who you are or who you love, but you should also be able to feel safe in any community that you live in." I believe the president should have a similar goal.

Some people argue that gay people do not deserve rights. This is an argument of religion and of logic. Some interpretations of religious passages seem to portray that all homosexualality is bad. It is up to them to decide whether that is true or not, but this should not be carried into the workplace. The U.S promotes freedom of religion but also equal rights, and one person’s entire life should come before someone else’s personal beliefs. Still, author Matt Welsh argues in the article “Yes, Gay Marriage Hurts Me Personally,” that gay marriage is not essential or true. I hope you, future president, can tell what is wrong with this argument but if not, let me explain. No marriage is essential. Heterosexual marriage is not essential, yet there is no one arguing that it should be outlawed! Marriage is something that is important to people for both moral and legal reasons, and it is a basic right that everyone deserves. Welsh also claims that some same-sex are not monogamous, and therefore there is no point to their marriage, yet 55% of opposite-sex couples divorce due to infidelity. No couple is perfect, and no one deserves to be treated lesser for being different.

Inequality doesn’t just stop at sexualities either. Transgender people in the U.S are often denied identity papers that reflect their gender, making it impossible for them to get a job, travel, access services or open a bank account. In 2015, 21 transgender people were murdered because of how they expressed their gender, the highest amount it’s ever been. People all along the gender spectrum are being bullied, harassed and even murdered simply because they were given a body that does not reflect their true gender, and that is a horrible truth to face. The president needs to address this and work on protection for all.

The 26th of June will forever be a happy day for me and hundreds of others. It is the day LGBT Americans made their first stride toward equality. It is a day of celebration and love, but it is also a call to action. It took 239 years for the U.S to finally allow marriage between two people of the same sex and those people still have no protection against discrimination or harassment in everyday life. There are still laws that ban people from using the bathroom of their preferred gender and there are still people being killed everyday because of their gender and sexuality. I truly hope that you, our 45th president, can help LGBT America in its goals for equal rights. Love is love, gender is gender and I need your help, future president, to achieve equality for everyone.

equality lgbtq rights
Published on Nov 2, 2016
Report a problem... When should you flag content? If the user is making personal attacks, using profanity or harassing someone, please flag this content as inappropriate. We encourage different opinions, respectfully presented, as an exercise in free speech.
East Junior High

While we sit here, pollution is slowly increasing and people are slowly dying off, it needs to stop or decrease dramatically.

Education for Those in Poverty

Poverty is a large problem, and so many children are not getting a good education due to poor funding to high-poverty areas, and because poverty ca...

To many people die in gun related deaths. This needs to stop, so we need to enforce stricter gun control laws.

Healthcare should be a right, not a luxury.