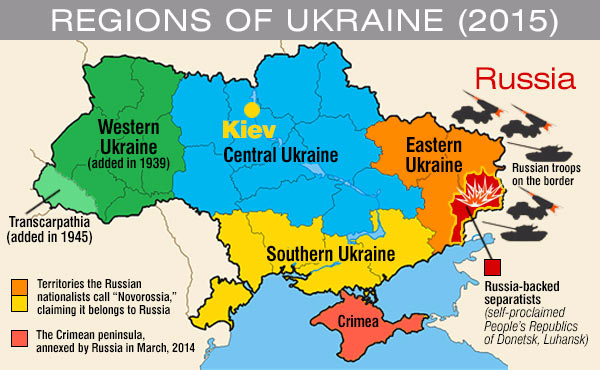 I know there are a lot of problems in the United States of America, such as immigration and poverty, but today I want to turn your attention to something that’s going on outside the borders of the U.S.

Two years ago I moved to Santa Clara, California from a beautiful large country in Europe, called Ukraine. My family wanted to change our living situation because of two reasons. First, my father was transferred to a better job in the Silicon Valley, California. Second, when we were leaving, the conflict between Russia and Ukraine was quickly growing into something more dangerous - the war.

The protests started mostly in Kyiv when President Yanukovych rejected the expected deal for greater economic integration with the European Union. Instead, he wanted to draw the country closer to Russia, because, as far as I know, he thought they were culturally closer to us and because President Yanukovych almost could only speak Russian. Or it’s because the Russian president promised he would provide low-cost gas export to Ukraine. But later, Yanukovich secretly resigned and was noticed on the territory of Russia where he was still talking about himself as a Ukrainian President, which in my view is not a smart move. Today, the new president, Petro Poroshenko, is trying to put down the Ukrainian-Russian conflict but it is not going as planned.

“An angry enemy encroached on our lives, our territory, our freedom and our independence,” said Petro Poroshenko.

The important thing is that Russia annexed Crimea, which is a part of Ukraine, because they believe that it was a part of their land in the first place. After that, the conflict became more serious. Basically, Ukraine is facing two wars at this particular moment: one with Russia and one within itself. One part of Ukrainians, called separatists, are willing to join Russia, so they kill Ukrainians. Also the Russian government wants Ukraine to join Russia, so they kill Ukrainians as well but they say that it is only a local uprising.

Russia wants us to divide, though we are “one country under God with liberty and justice for all”, so we all still face two wars. Every day our regular and volunteer armies on the Donbass are trying to save the unity of the country and are getting seriously injured or killed. Since I am from Ukraine, I care about it deeply in my heart. It is my first home. And now I ask you, Mr. or Ms. President, to find a way to help Ukraine to survive and stay undivided.

“It is Europe’s and it is America’s war now, too. It is the war for the free world,” Poroshenko said.

foreign policy
Published on Nov 9, 2016
Report a problem... When should you flag content? If the user is making personal attacks, using profanity or harassing someone, please flag this content as inappropriate. We encourage different opinions, respectfully presented, as an exercise in free speech.
Santa Clara High School

Why is Racism Still in Our Country?

This needs to stop. No matter our race, we are all the same.

The Homeless Community Needs Your Help

Change has to be made in order to help and reduce the increasing population of people who are homeless in the United States.

Dealing with the Islamic State

This letter was written to address the current problem that is the Islamic State (ISIS), a group bent on terrorism out of the middle east, and ask ...

A letter dedicated to the lives we have lost in US waters and the concern in the lack of safety.