I understand that you have to deal with many problems; war, debt, immigration, poverty, etc. But consider this, we only have 50.7 years of oil reserves left (British Petroleum). Eventually, we will run out fossil fuels. Whether it is a smooth transition into alternative energy, or World War 3 will be decided by you. Don’t pass this inevitable problem down to your children. Fix this today, while we still have time.

Hydrogen energy is a solution. Hydrogen as a fuel burns into water (as opposed to CO2), is the lightest fuel (which makes it easy to transport), and is the most abundant element in the universe. That means unlike fossil fuels, hydrogen is infinite. On earth, hydrogen exists mainly in water molecules and must be separated from the oxygen atoms to be used for energy. Unfortunately, most (+95%) of the time fossil fuels are used to do this because it’s much (up to 3 times) cheaper. However, researchers at KTH have found a breakthrough, “‘water splitting’, requires the use of costly, precious metals as catalysts [ruthenium oxide (RuO2) or iridium oxide (IrO2)]…a number of research teams across the world are trying to come up with alternative means to substitute them. A group of researchers, headed by KTH Professor Licheng Sun...succeeded. The new alternative material, which contains vanadium and nickel, is a monolayered double hydroxide.” (AZO Cleantech). This method of water splitting uses no fossil fuels. More breakthroughs like these can potentially make hydrogen not only cleaner, but cheaper and more sustainable. 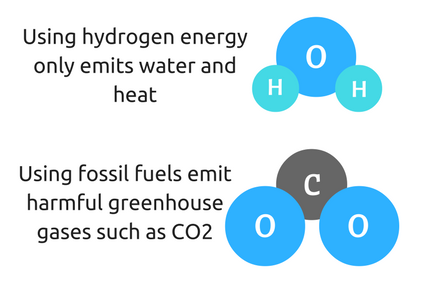 If we fail to transition to the hydrogen economy or some other alternative energy source, we will have to rely on fossil fuels. They are the leading cause of global warming. Remember, in 50.7 years, we will run out of oil. What happens then? To put this in perspective, the end of 2015 was the second time in history that humans have used more oil than we have found. (British Petroleum). Our use of fossil fuels has changed our problem from, “Fossil fuels will destroy the environment” to “What will happen when we run out of them?”.

We are already starting to use more fossil fuels than we find. Alternative energy is a must. Hydrogen as energy can fix our fossil fuel problem if we spend enough money researching on making it more cost efficient. The first hydrogen fueled car is incomparable to the billionth gasoline car. California already has invested $50 million on 23 hydrogen fueling stations (California Energy Commission). Hydrogen energy is clean, sustainable, and transportable. And with your help, it will also be a reality.

oil hydrogen economy Energy fossil fuel environment
Published on Oct 13, 2016
Report a problem... When should you flag content? If the user is making personal attacks, using profanity or harassing someone, please flag this content as inappropriate. We encourage different opinions, respectfully presented, as an exercise in free speech.
Bernal Intermediate

SAY NO TO CHILD HUNGER

Child hunger is a worldly cause. I- and I know so many more people- would like it to stop. I desperately encourage donating to funds and fundraiser...

My issue is gun violence in the U.S.

Use the Sun and the Sky

Some people believe that climate change is not a problem. However, the truth is that it’s worse than you think. If we do not stop burning fossil fu...

Dear Next President, Energy has become a problem in the past 10 years. “The US has been using coal since the early 1700s” according to the US ...