I'm writing to you because of an important issue that needs to be fixed - poverty and homelessness. Homeless people are starting to become more common each day. 564,708 people are homeless today which is an insane amount of people. A lot of people are affected by poverty or homelessness because of how low the minimum wage is, the amount of jobs there are, and how expensive houses or even apartments are today. Even though they're all programs that help out the homeless, it's not enough compared to the percentage of homeless people rising everyday. A solution to this problem is to make more jobs and better programs that help homeless Americans.

The first step toward ending poverty is creating more jobs. There are not enough jobs right now, according to the National Coalition for the homeless. One of their articles states,“With unemployment rates remaining high, jobs are hard to find.” The lack of jobs is a huge issue and it's one of the main reasons why homeless people are so common. We can create a lot of technology and construction jobs, as well as many others. We could create more jobs where people can fix or upgrade things like bridges or roads. There can be a lot more jobs we can create in the tech industry. Like people who build robots and other new technological items. We can create thousands of new jobs which will help combat poverty. Creating more jobs would cut the percentage of homeless people by a lot, so if we were ever going to stop poverty and homelessness creating more jobs would play a huge factor in that. Making new jobs isn't the only way to stop homelessness and poverty, another way is to raise the minimum wage.

The final reason why I think the percentage of poverty and homeless is so high is because of the prices of houses and apartments. Houses and apartments are too high right now and they need to be reduced. The prices of houses have been increasing every year in California with the median of prices being $479,000 and renting being $2,400 per month. That much money is crazy and homeless people will never be able to get back on the feets and buy a house or even rent an apartment. This is a major reason why people are in poverty or people are homeless. Most families struggle to pay and keep their houses or apartments every day. If we were to reduce the prices of houses and apartments we can also reduce the percentage of people stuck in poverty or in the streets. Another way to solve this is to also build more houses or apartments for more people to live. This is the is the third reason why I think there are so many homeless people right now so please consider fixing this issue and getting rid of homelessness and poverty.

The three reasons why I think there's so many people who are homeless or stuck in poverty is because the amount of jobs we have, the minimum wage, and finally the cost of buying or renting houses and apartments. These are the main issues that are contributing the amount of homeless people in America. If we were to solve all these issues then the percentage of people who are homeless or poor we decrease tremendously and a homeless person would be extremely rare. Homelessness and poverty is a huge issue in America. The next president needs to solve this problem to make America a lot better than it is right now. 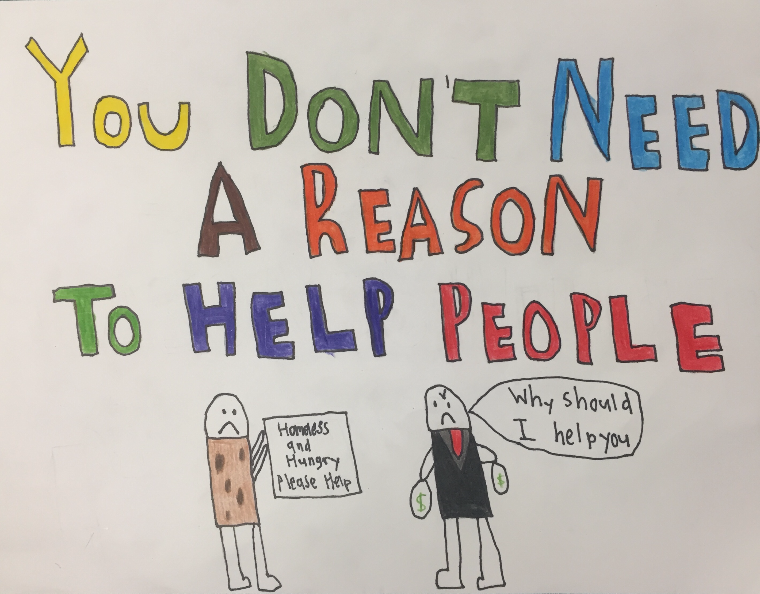 hunger homelessness Poverty
Published on Oct 9, 2016
Report a problem... When should you flag content? If the user is making personal attacks, using profanity or harassing someone, please flag this content as inappropriate. We encourage different opinions, respectfully presented, as an exercise in free speech.
Bernal Intermediate

a short letter about racism.

Many bright students are unable to get a good college education due to their families not having enough money. This is a problem.

Poverty needs to change around the country, people in poverty need to have better opportunities and better jobs

This is how poverty affects people.