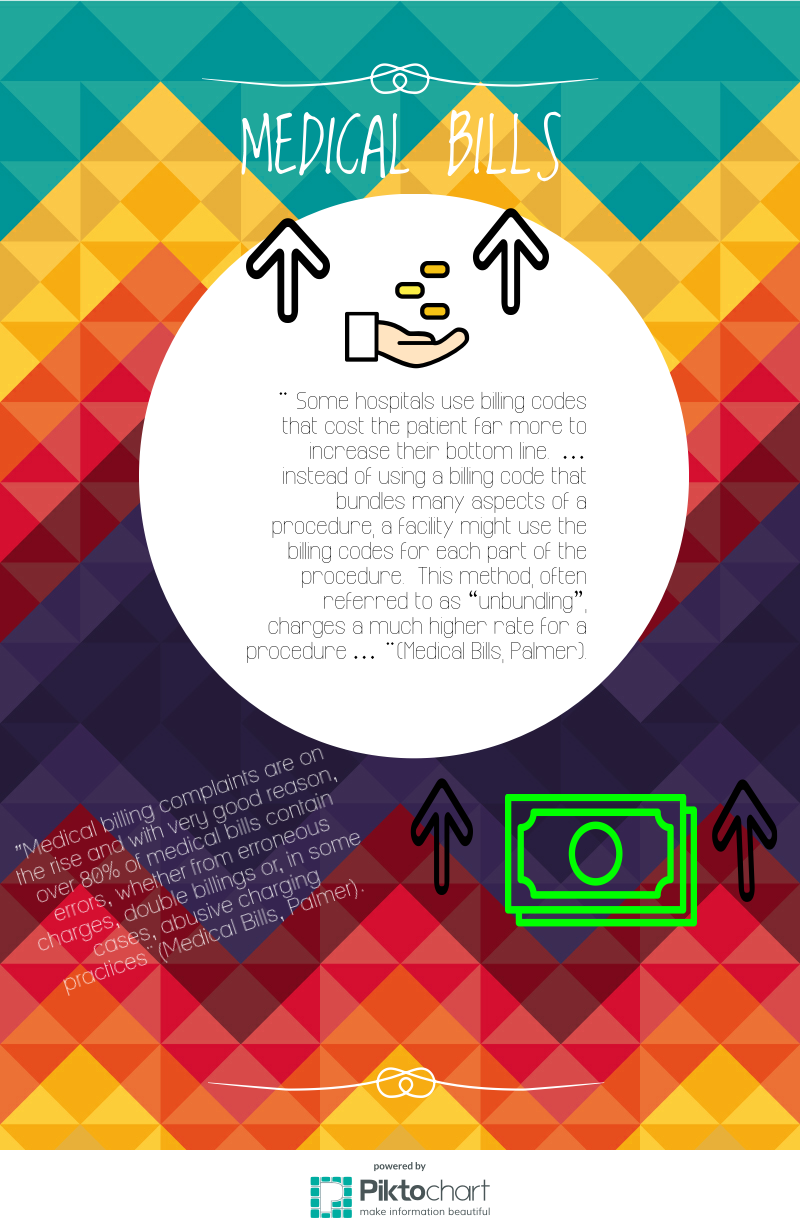 Everyone has medical issues. Everyone at some point in their lives have been to the doctor and has had to pay the bill. Every person has had a medical bill in their life. My family has a lot of debt because of medical issues in the past 2 years. The government needs to assist people with their medical bills because hospitals are billing patients incorrectly, and some are also over charging patients.

Hospitals are billing patients incorrectly. Medical bills are a major issue in today's economy. ”Medical billing complaints are on the rise and with very good reason, over 80% of medical bills contain errors, whether from erroneous charges, double billings or, in some cases, abusive charging practices¨ (Palmer). This is showing that the medical bills are having many complaints about how it is interrupting people's lives. This also shows that it is easy to not trust the hospitals' billing process.

Often times patients are being overcharged. ¨Some hospitals use billing codes that cost the patient far more to increase their bottom line. … instead of using a billing code that bundles many aspects of a procedure, a facility might use the billing codes for each part of the procedure. This method, often referred to as “unbundling”, charges a much higher rate for a procedure … ¨ (Palmer). This is showing that the hospitals are the major reason for all the medical debt because of the billing code for the patients, and for secretly charging them more.

Others may say that medical bills do not involve them, so why should they care? That is an understandable question; however, ¨Over 80% of medical bills contain errors¨ (Palmer). Everyone has had a medical bill at one point in their life; yet, some people don't understand the struggle of medical debt.

Medical bills are in everyone's lives. It is clear that medical bills are hurting a lot of people in the US today and nothing is being done about it. Some people need financial help that they can't get because maybe they don't have a job to get insurance and most of the time the insurance doesn't even cover it all. You can fix this issue by providing more medical living and by monitoring hospitals´ billing procedures.

The government needs to assist people that are getting over charged and billed incorrectly. This issue is a big problem according to The Hospital Accounts Report Analysis on Second Quarter 2014. They stated that ¨U.S. hospitals reported that 5.93 percent of their total second quarter 2014 gross revenue was written off as charity care or bad debt, compared to 5.09 percent in the first quarter of 2014 ¨ (Hospital Accounts). Some people are going homeless because they can't pay their medical bills and they are going in to bad debt. Some people would argue that most people aren't going homeless because they don't have the debt because they don't have to go to the hospital. Thank you for taking time out of your day to read about my issue that I hope can be handled in the future.

health medical debt bills
Published on Nov 8, 2016
Report a problem... When should you flag content? If the user is making personal attacks, using profanity or harassing someone, please flag this content as inappropriate. We encourage different opinions, respectfully presented, as an exercise in free speech.
Oak Hills High School

This letter explains how you should up airport security to reduce terrorism.

Immigration is a problem and it needs to be solved.

Should parents be sneaking vegetables into their kids foods? Lettuce talk about that.

DIPG is a pediatric brain tumor found in young children. When diagnosed the child is given on average fifteen months to live. Prognosis and treatme...