Many Native American’s property and land has been violated over the decades because of the USA. The three things the constitution wants to protect the most is life, property and liberty. Pushing them out of their land for our benefit is already breaking the law of protecting property. This would be like if Italy built a pipeline through the Vatican City. I think it is extremely unfair how we can kick someone out of their own homes. We would probably only use the land to build something anyway, why would we need it over someone that lives there?

In 1830 Andrew Jackson was one of the main people who brought up the Indian Removal campaign. Andrew Jackson just decided that it was in the US’s best interest to move the Native Americans, some tribes left where ever they were peacefully living, but not all did. The Native American’s had been there before and they should have to be relocated just because of the Native American Removal Act. Right now there is something happening called the North Dakota pipeline. In these Native American sites there is a lot of oil, what is happening is that people want to make a pipeline to get oil from the ground. “The long-brewing standoff stems from construction of the 1,172-mile pipeline, which protesters said will threaten the environment and destroy Native American burial sites, prayer sites and culturally significant artifacts.” North Dakota wants to put something to benefit themselves which is ruining a sacred spot for the Native Americans. It’s not fair that their property is being violated without their own consent. 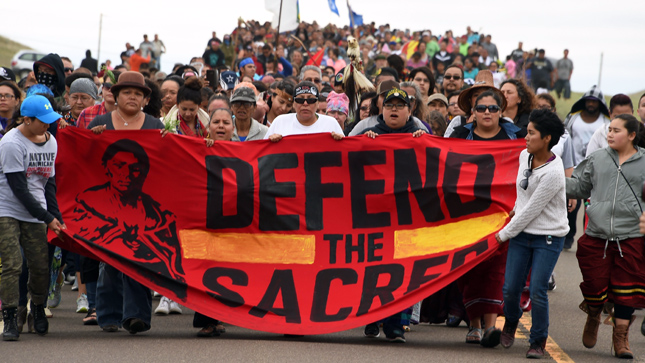 native american pipeline north dakota rights protection
Published on Nov 15, 2016
Report a problem... When should you flag content? If the user is making personal attacks, using profanity or harassing someone, please flag this content as inappropriate. We encourage different opinions, respectfully presented, as an exercise in free speech.
Baker ELA

ANIMALS ARE SCREAMING OUT. WE JUST CHOOSE TO IGNORE.

Dear Madam or Mr. President, My name is Jenna, and I am 13 years old. Although there are many other letters with the same topic, I find animal abu...

Discrimination and Racism are big issues in the U.S. Why do we have such a hard time accepting others?

Letter to our next president discussing Police Brutality & Discrimination to Blacks

Assure the Safety and Future of Gay Citizens

Gay Americans are still the target of hate crimes.

Something needs to be done.

I want to make Native Americans a recognized groups and get the acceptance and recognized to their homelands and their rights.

Despite the victories of the LGBTQ+ community, there is still much hate against the community. Homosexuals and transgenders are often persecuted in...