To whom it may concern,

Feminism is something that our people of this country need to be more informed and away about. Feminism, in my definition, is the push for equality for not only just men and women but for all the different races and genders so everyone can be happy and comfortable. I believe feminism should be taken more seriously and not so much as a joke. You can go anywhere whether it's online or in real life and people will joke about feminism and make it look like they're just man haters. Being a feminist does not mean you think all men are evil. Being a feminist does not mean you believe "all men are rapists." According to BuzzFeedNews there's actually men calling themselves "Meninists." Meninism is basically a trend on twitter that mocks feminism. It Claims it's okay for women to objectify men but men not allowed to objectify women ect. Meninists are usually the people who have no idea what the true definition of feminism is and are too narrow-minded to actually learn what it means. One example of menism is, "Stop objectifying men. Real men have curves. #MeninistTwitter— Markus Lenz (@MarkusLenz15)." According to theodysseyonline.com, "Women are paid 23% less than men for the same work" and "One in five women are raped or assaulted in gender-based violence." Clearly women aren't the only ones who are raped; men are raped too, just not as often as women are. Feminists address women's issues more than men's issues because they don't want people taking care of the men's issues before theirs. This is because women's issues are more probable and common so we therefore want to focus on them more. I mean, it's terrible that being born a certain way depends on the way you're going to make money, be treated with kindness and respect, or gain the same amount of success.  It's even more saddening that so many people are so ignorant to the fact that women are not equal to men still. People actually believe that women are equal to men but that's still not the case. To conclude, the only thing that really matters is that feminism, straight to the actual point, is that it's about gender equality. We need feminism, not only in the U.S. but in other countries as well, without equality women who are single parents won't to be able to supply their children with their basic needs, men would be able to constantly treat women without respect and physically and mentally degrade them, and white men would be more superior to, let's say, black men. With feminism we would be able to fix all these things and everyone would be able to live without poverty and be happy, besides the egotistical white men or women! 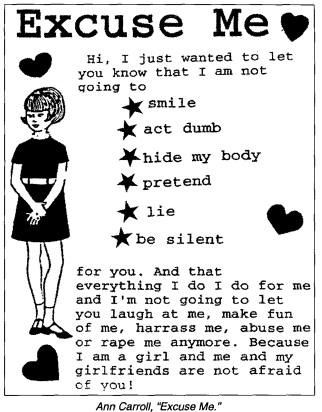 Killerman, Sam. "5 Reasons Why SO Many People Believe Feminism Hates Men and Why They're Not  True" It's Pronounced Metro Sexual, http://itspronouncedmetrosexual.com/2012/12/reasons-people- believe-feminism-hates-men/#sthash.3tht7HBy.dpbs  June 3, 2014

feminism equality
Published on Nov 30, 2016
Report a problem... When should you flag content? If the user is making personal attacks, using profanity or harassing someone, please flag this content as inappropriate. We encourage different opinions, respectfully presented, as an exercise in free speech.
Craig High School - Ms. Tucker's English 9

Reasons Why There Should Be Stricter Gun Control Laws

Dear Future President, we live in the (not very united) United States of America.

The Problem with Abortion

I am here to tell you about the Pro-choice and Pro-life sides of abortion.

Illegal immigration has become a problem over the years. About an estimate of 11.1 million immigrants have been placed here for a better life. Are ...

Dear Future President, you should defend the constitution and keep the right to bear arms law.

Mr/Mrs. President we should leave the police stations to sort out the supposed bias themselves, as they are taking action to solve any bias and let...

Immigration Should Be Legal

Dear Future President: The topic of Immigration has bee...