Hello! My name is Brooke. I am now 14 and have been in public school for about 4 years now. When I first came to public school out of a smaller private school in my area, I was in 4th grade and was shocked to see that nobody in my class knew how to write in cursive. I was even more concerned about this issue when I found out that we had to learn cursive that year! I had already learned cursive handwriting, and to waste almost a quarter of learning time that year to re-learn it seemed unnecessary. Nowadays, cursive handwriting isn’t required in most states, so parents have to either teach their kids to write in cursive themselves, or pay to send them to a private school for a year. Most of the time, parents don’t have enough money to send their kids to a private school just so they can learn proper handwriting. Included in an article by The New York Times, “The Common Core standards adopted by most states in 2010 do not require teaching cursive, and many districts have chosen to spend their limited time, money and resources on core subjects or more modern skills.” I strongly encourage that we set aside the much needed time, money, and resources to teach cursive to the next generation, before it’s too late. Cursive handwriting is absolutely, 100%, something our future generations need to learn; how else would they sign a check or a legal document? Or what about reading the Declaration of Independence? Some day, Americans may not even know what their history is. Cursive will soon become a lost art, and with it, so much of our history will be lost too. I just started 8th grade this year, and few people in my class have legible cursive, and much less know how to write or read anything besides their name. According to CNN, only 2 out of the 3 candidates write in cursive consistently. What example do you think this is setting for the youth of America? That once you grow up, it’s really unnecessary? If that’s the case, then I’m sorry, Future President. America will already be too far gone once that message has gone out to millions of America’s impressionable youth. I believe cursive should not only be a staple in grade schools around the country, but enforced at a younger age, too. In the state of North Carolina, HB 146 only requires students to have a fundamental understanding of how to read and write cursive in grades 3-5. Nowhere does it state that students should be continually enforced to use cursive through secondary and high school, and so after those 3 years, cursive is basically foreign to the teenage mind. Teaching and implementing cursive handwriting in the early years of primary school may help to prevent this, and even make it a staple in the everyday lives of students. Please take a long look at the little things in this country, Future President. The small details that could one day make a huge impact in our country, and consider making some changes to prevent minimal issues from becoming something much much worse under your watch. 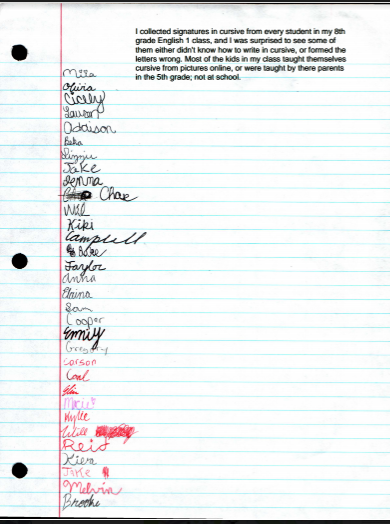 education
Published on Oct 4, 2016
Report a problem... When should you flag content? If the user is making personal attacks, using profanity or harassing someone, please flag this content as inappropriate. We encourage different opinions, respectfully presented, as an exercise in free speech.
Weddington Middle

The Education of All

Everybody has the right to be educated, no matter where they live or where they came from.

I want to change the way new college students think, by making it mandatory for kids to graduate high school with a credit completed in a life skil...