Did you work hard to receive a college degree? I’m guessing you did because you knew that it would help your future. Well, in today's world, it is getting harder and harder for young adults to pay for the education that they need. The rise of college tuition is becoming a bigger issue in our country every day. My question for you is, how are we going to stop this climb in price?

Adam Davidson, from the NY Times, says that in 1974, the average family earned a little under $13,000. A home was around $36,000 and a car might cost you $4,400. College was affordable, at a sticker price of $2,000 a year for a four year private college, public was only $510 per year. Time jump to 2015, the average family makes around $64,000, homes have increased by two-thirds, and shiny new car prices have remained consistent in their price increase. Here’s the worst part, private universities have tripled their tuition prices, costing around $31,000 a year, just for tuition! Public is even worse, going from $2,000 to $9,000 a year. Once you add on room and board, the price is out of proportion. The balance of home income and college tuition prices are not rising equally. Student loans, perk wars, and teacher-related costs are hurting us as a country. Tuition is rising because colleges are paying too much for construction and new, inflated teacher salaries. Tuition would cost less if we stop the major construction sites around campus. Students come to a college to learn, and colleges are drifting away from that aspect of college. Work-Study, which is getting an on campus job, is a great way to lower your college bill. USA Today explains how Work-Study is an average of 20 hours a week and is part-time. This won’t pay off all of your bills, but greatly reduces them.

Just entering the eighth grade, I still have a long time until I even have to worry about college. Even though the jump in price is terrible today, I worry what it will be like in five years. Sophie Quinton, from CNN, says that in 2014, over a quarter of first year college attendents didn’t know that their loans came from the federal government. Half of those students weren’t even aware that they were borrowing money to help with college bills. A way that would help college costs is to try to get students in and out of college in four years. The Washington Post claims that most students are now going to college for six years, costing about $15,000 more in tuition. A CNBC writer, John W. Schoen, states that at a public, four year college, the fees would cost about $9,139 each year. Schools in today’s world are worrying too much about having amenities like gyms and swimming pools to persuade eligible students to commit to their school. Even though these perks are nice to have, they are not nice to your wallet. We need to be focusing on the main part of college, learning. Tuition may be going up, but we can’t forget about the jump in price for the fees of the best colleges in our country.

Some people believe that you don’t need a college education. That after high school, there is no need for higher education. I feel that college is necessary for a brighter future. Danielle Kurtzleben, from U.S. News, expressed that people from the ages twenty-five and thirty-two make about $17,500 more than students that only have a high school degree. New studies show that college degrees are worth more to a future than they have been in the last half a century. College Atlas states that people who earn a college diploma also have better job satisfaction. They strive so hard for their desired profession, so when they get that job, they are more happy with it than having a job just to make money. They love what they do. The site also presents the fact that in a recession, a company is more likely to fire people with less knowledge of their job. Unemployment for college graduates during a recession is much lower than high school graduates.

This is a serious issue, and we need to find a solution fast. Are you ok with seeing your country's children struggle with college, or do you want them to be victorious in their path to success? We need to find a solution to this problem, because we are already 1.2 trillion dollars in debt from student loans. Tuition prices are soaring high just like a kite.College needs to be a logical and affordable option for those who want to pursue a serious career. Now, upcoming President, are you going to let college tuition prices rise, or are you going to do something about it?

Schoen, John W. "The Real Reasons a College Degree Costs so Much."

Troutman, Katey. "5 Reasons Why You Should Not Take Out Student Loans."

Gillett, Rachel. "The 25 Highest-paying Jobs You Can Get without a College

Klein, Ezra. "The Benefits of a College Degree in One Graph." Business.

Fortenbury, Jon. "Is Federal Work-study a Good Way to Pay for College?"

Douglas-Gabriel, Danielle. "Why so Many Students Are Spending Six Years 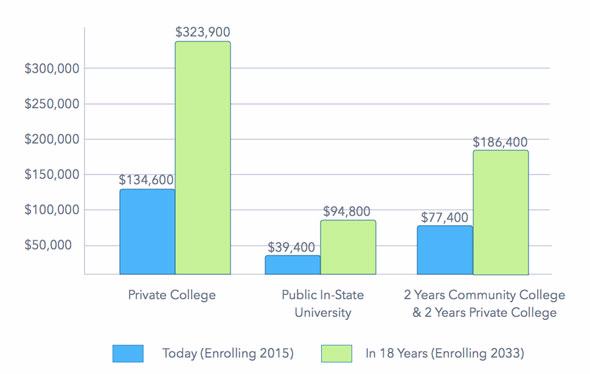 Education Costs college
Published on Oct 4, 2016
Report a problem... When should you flag content? If the user is making personal attacks, using profanity or harassing someone, please flag this content as inappropriate. We encourage different opinions, respectfully presented, as an exercise in free speech.
Weddington Middle

Community College Should Be Free

Government should give a subsidy for college tuition