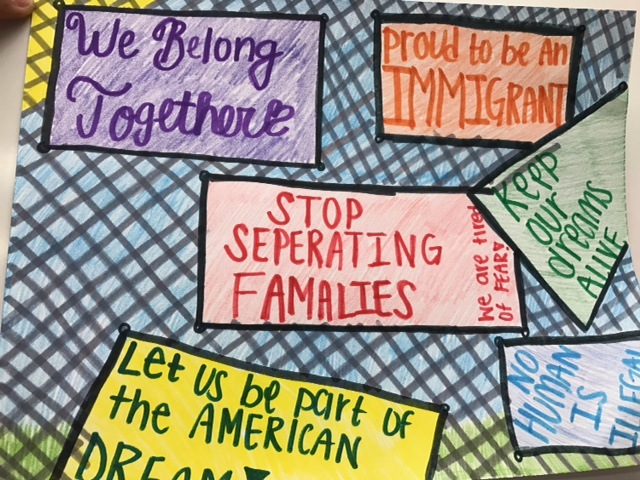 Now that you are president I hope you can make a change about Immigration Laws. I am dissatisfied with the privileges that illegal people living here have. There are just human like us and should have the same rights as everyone else. There are a lot of immigration problems that you can fix and I can guide you where to start. Homeland security has the rights to kick people out of there houses because they aren’t citizens. Also thanks to whoever made the law that now in california everyone has the rights to have a licence, I am happy because now immigrants have one law that’s the same as everyone else’s. Hopefully you take into consideration all of my ideas now that your president.

I am going to tell you about a situation regarding federal government using raids to enforce immigration laws that happened not to long ago. According to Lisa Rein ,” U.S. authorities begin raids, taking 121 illegal immigrants into custody over the weekend.” This is so unfair in my opinion not only because they are fleeing but the way they are doing this. People that can be affected by this live in fear daily thinking it can happen to them. They are taking children into custody and it’s not even their fault, their parents decided to immigrate to the U.S. so now the kids are facing consequences too. If there really has to be a law about others immigrating here illegally have to live in fear, the consequences shouldn’t be that severe.Homeland security that has the authority to kick people out of their house for being immigrants. How would you feel if someone knocked on your door in the middle of the night, asked you for legal documents, search your house and, you don’t have them so they take you just like that back to your country? This has not happened to my family but I have heard of stories that people are scared whenever people knock on their door because if they catch them without paper they have to go back to their country with no exceptions. Families have been separated and even little kids that know nothing.

Another issue I am concerned about is illegal people having a license. Here in California it is a law that you can have a license if you are illegal or not. According to Boston Globe Editorial Board, “Licenses are a privilege that all drivers, citizens and noncitizens alike, must earn.” This is very true and this is why I think everyone should have the privilege of having a licence. If they decide to waste your chance and get drunk and drive that’s their choice. Maybe yes illegals do things they shouldn’t but you don’t know the reason why or the situation their in. Everyone should be treated the same even with licences. I feel if everyone had licences there would be less accidents because everyone who’s driving knows the rules. There are people in fear everyday that pray not to be stopped by cops because they don’t have a licence. Hopefully you can make a world wide law that illegal people can have a licence in any state.

In conclusion I hope you feel bad for all the years that these immigrants have had to struggle and adapt to them not really wanted here. I hope you really took into consideration my main point and you make a difference. Just put yourself in their shoes and think about how they might feel about about no one doing anything about it. If you do make a change I will be so thankful and if you don’t at least I want to say thank you for taking the time to read my letter, hope you have a good day

immigration issue
Published on Oct 9, 2016
Report a problem... When should you flag content? If the user is making personal attacks, using profanity or harassing someone, please flag this content as inappropriate. We encourage different opinions, respectfully presented, as an exercise in free speech.
Bernal Intermediate

All for One and One for All

All countries have to work together to gain success in the future; working together is better.

I think that abortion should be kept legal for several well thought out reasons, mostly for the woman's health.

Illegal immigration is a problem the U.S is dealing with, and we need to put a stop to it.

Power companies are over charging for something that is a basic need in modern society.

Immigration is a very debated topic in today's world, and my belief on this is that it should be allowed with thorough checks and assistance if nee...

I think that the president should allow illegal immigrants to stay in the US.