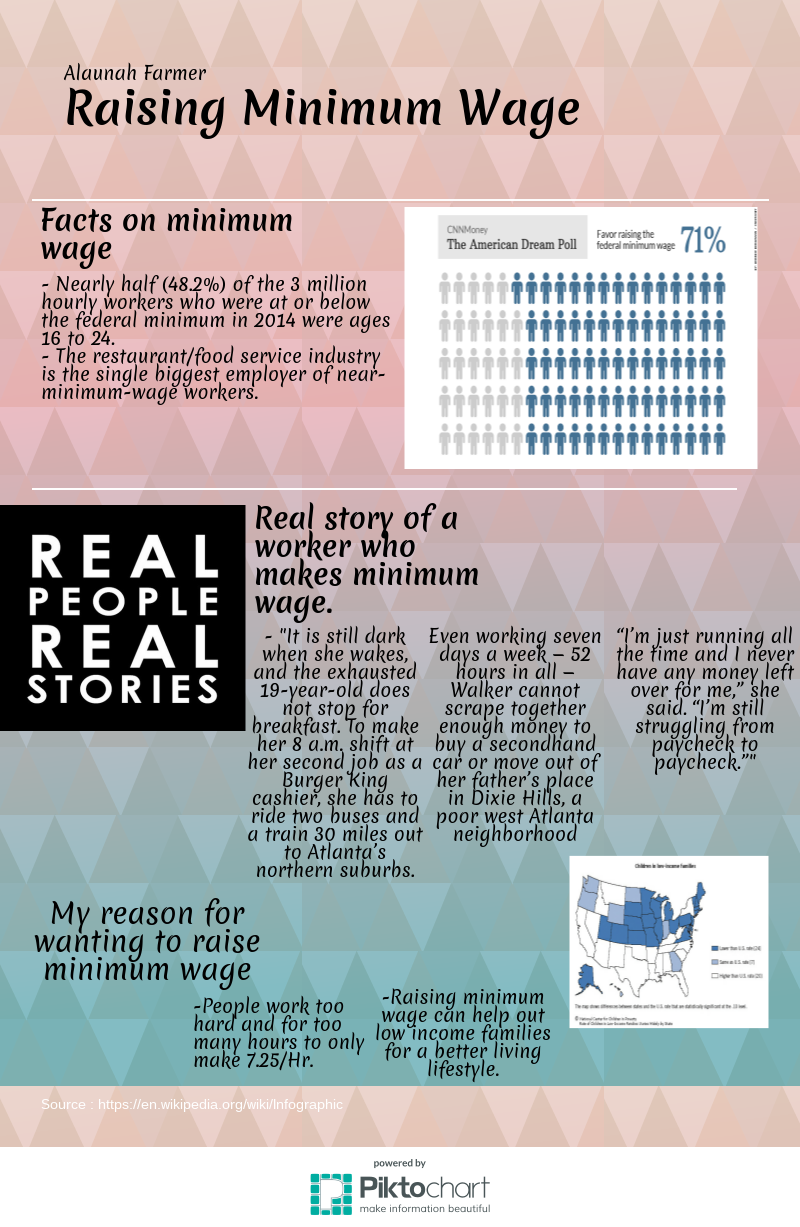 The raising of minimum wage impacts America by helping families who don’t make enough to support them and their necessities. This topic has become more important by the increasing number of families who are going into poverty because their paychecks aren’t able to stretch. People that are impacted most from low minimum wages are low income families. They are impacted by not being able to afford the things that families need. Some students' families can’t afford clothes or school supplies for their child. I know families who can’t afford necessities and who live like this everyday. Minimum wage needs to be raised because people work too hard to make too little.

First, people work too hard and for too many hours to only make $7.25/Hr. “The restaurant and food industry is the single biggest employer of near-minimum wage workers” (Desilver). This shows that a change needs to occur; for example, most restaurant jobs pay every two weeks and by the time a mother gets paid her rent is due. Once she pays her rent, then she has no extra spending money for necessities. This also shows that families can’t live off that much money because if a mother is late on her rent too many times, then she could be evicted.

Next, ”Nearly half (48.2%) of the 3 million hourly workers who were at or below the federal minimum in 2014 were ages 16 to 24” (Desilver). That is a big percentage of people who are at or below the federal minimum wage; it shouldn’t be that many people. For example, a mother that is 24 and has 3 children can’t possibly provide for all her babies and keep her bills paid living off 7.25/Hr.

Some may say that minimum wage is enough for low income families. Although the counterargument is understandable because there are probably smaller families who makes 7.25/Hr and are living perfectly fine, it can’t possibly be true when most families with low incomes have children who do not have the necessities they need for school and such. All families aren’t small; some families have one parent with 3 or 4 younger children living off of one income.

Minimum wage needs to be raised for people who work too hard and for bigger families. This change would benefit the country greatly. Many people wouldn’t be in poverty, and students wouldn’t be bullied for how they are dressed at school because their parents will be able to afford things they need. What people should realize about raising minimum wage is that more people will be better off and have better living lifestyles; not everyone went to college and got degrees and the people who didn’t can’t always find good paying jobs. Thank you future President for taking the time out of your busy schedule to read my letter on raising minimum wage.

job market lower class minimum wage family money
Published on Nov 8, 2016
Report a problem... When should you flag content? If the user is making personal attacks, using profanity or harassing someone, please flag this content as inappropriate. We encourage different opinions, respectfully presented, as an exercise in free speech.
Oak Hills High School

There is too much testing in America; it's stressing students to the max!

57 million people, humans, future leaders able to change the world, dead. Since 1973, millions of babies have been killed through abortion. Many p...

You get what you get

Child abuse should have bigger consequences

The government needs to do more to protect the United States from groups such as ISIS.

The rising cost of colleges everywhere

My letter is basically about how students are having a hard time not only paying off college bills but also how when students take out loans and th...

Everyone in America works hard, they deserve a higher minimum wage

A higher minimum wage helps a lot of people in the United States. People are not happy with the minimum wage.