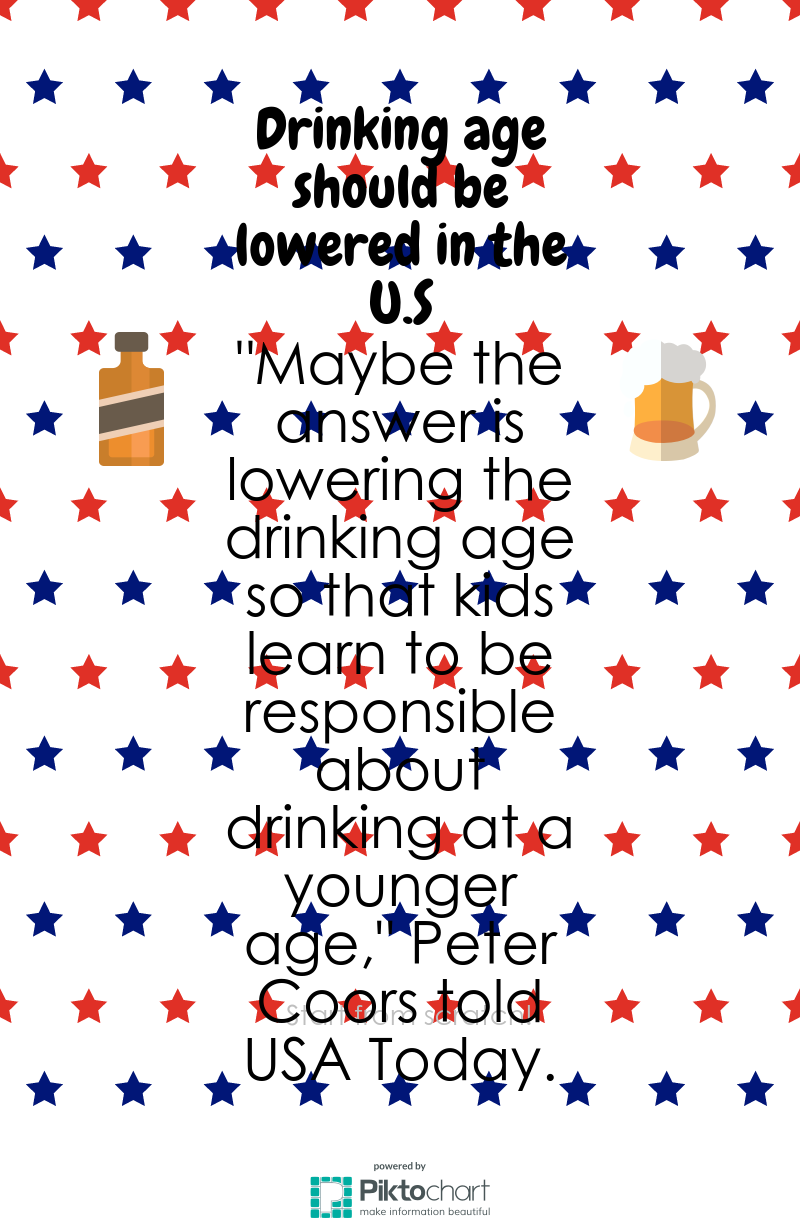 In the United States by the age of 18, you are considered an adult. Some example are that at 18 you can vote, you can pay taxes, you can buy a house, and you can enroll in the army. "Maybe the answer is lowering the drinking age so that kids learn to be responsible about drinking at a younger age." (Peter C). This quote is important because if we lower the drinking age kids will learn to be more responsible and understand what drinking alcohol can do to you just like having the right to vote teaches teenagers that voting is important in our country.

The 21-and-over drinking age prompts younger Americans, most of whom are perfectly capable of drinking responsibly, to do their drinking in private and in short amounts of time, creating potentially dangerous conditions. The National Minimum Drinking Age Act infringes upon both civil rights and states' rights.peter coors-"I'm not an advocate of trying to get people to drink, but kids are drinking now anyway. All we've done is criminalize them." I think peter is right because most have drank alcohol and all adults do is criminalize them even though when they were kids they were probably drinking to.

Some may say that ¨those under the age of 21 should not drink alcohol because it could be physically damaging to their still developing bodies¨ (minimum drinking age). However, if they are old enough to buy a house then they should be old enough to drink.

drinking age laws drinking
Published on Nov 28, 2016
Report a problem... When should you flag content? If the user is making personal attacks, using profanity or harassing someone, please flag this content as inappropriate. We encourage different opinions, respectfully presented, as an exercise in free speech.
Oak Hills High School

Heroin smuggling needs to be stopped.

Keep Abortion Legal and Available to Every Citizen

Abortion is a medical advance that has changed lives for Americans everywhere. Working backwards by making it illegal would cause devastation to ou...

The Prevalence of Drinking and Driving Among Teenagers

This letter civically addresses the future president and asks him to lower the legal drinking age to 18 on the basis that teens would not feel the ...