Have you ever dumped trash in a lake, ocean, river, or even a stream? Then you are taking another step in polluting this world. According to “DoSomething.org," over 1 million seabirds and 100,000 sea mammals are killed by pollution every year. Pollution: problem then, problem now, so don’t let it be one in the future. Pollution is a serious problem that must be handled now.

Ocean pollution can come from trash blowing off streets and trash blowing off of landfills into streams and rivers, and containers can fall off of some ships if it is traveling in stormy weather. There are also many causes to air pollution, like fossil fuels being burnt. Smoking and cooking can even cause air pollution.

Water pollution can cause harmful algal blooms. These blooms can release lethal toxins that have the power to kill fish, marine mammals, seabirds, and harm humans. Pollution can also cause acid rain. By burning fossil fuels, acid compounds are formed, and this is acid rain. This acid rain can harm or kill fish. It also harms trees in forests and can harm humans. By dropping trash into a stream or ocean you can help create a garbage patch. Garbage patches can leave off toxic chemicals that can potentially harm animals. 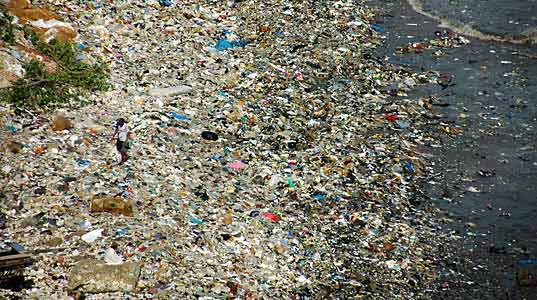 I think this problem should be cared about because it is affecting all of life on planet earth including our health. If this continues, pollution will harm more and more of life everywhere which I believe is unacceptable. Pollution can also cause global warming which is another serious problem that I will not get into, so stopping pollution is one step towards solving global warming. This problem has been around forever and will not stop if we don’t really make an effort to stop it.

To solve these problems the world can work together. We could turn off lights, stop dumping trash into the ocean or streams of any sort, avoid leaving cars on unoccupied, and limit driving. The law enforcement can also seriously crack down on this and make the punishment larger to stop people from dumping trash in bodies of water, etc.

This world is inhabited by pollution and is being damaged by it in multiple ways. The problem of pollution can be stopped with an effort of our president, America, and the rest of the world.

global warming pollution
Published on Nov 5, 2016
Report a problem... When should you flag content? If the user is making personal attacks, using profanity or harassing someone, please flag this content as inappropriate. We encourage different opinions, respectfully presented, as an exercise in free speech.
Boyden-Hull

We should not have homework.

Gay Marriage is NOT Wrong

Even though the Supreme Court ruled that gay marriage is guaranteed to homosexual couples under the Constitution, many people are still opposed to ...

Domestic violence is ruining the homes of innocent people.

Abortion is messing our nation up.