Dear President Of the United States Of America,

I understand that life being the President of the United States is very busy and brings a lot of responsibility, but as a citizen of this country, I think that there are many issues that could be thought of with more concern in the next few years of your presidency. Many people may want you to focus on larger current problems in the United States, such as ISIS, or illegal immigration. As much as I have an opinion on these topics, there is too much of a theme that I believe should be cut out in this Country and in this world: Hatred. In my opinion, the human species spends way too long thinking of how we could criticize each other, just for differences that we can’t help, such as race or religion. Imagine if giant pandas started attempting to kill red pandas just because they were red; seems unfair. In summary, the human species needs to quit putting their heads down fighting with one another, and take a look up for a change. We need to put our minds to work, and work together to solve more beneficial subject’s such as climate change, air pollution, and habitat destruction from industrialization. As the leader, the boss of our country, I trust you to lead the revolution, to make our country a cleaner and less industrialized place to live in.

Every summer I spend two months in the middle of the woods in New Hampshire, and if I didn’t have to go to school, I might be there year round. Watching all the animals and nature around me makes me really pleased, but as sad as it is, I know that this is one of the very few areas like this left in this country. Air pollution and other types of pollution have ruined this planet over the years, and as a kid with asthma, the air pollution seems most relevant. According to Natasha Maguder, who writes for CNN, “Air pollution is responsible for up to 7 million deaths a year.” That’s really bitter to think about, but it’s a sad reality. The only problem I have with it is that it could easily be fixed, all it needs is effort. Pollution comes from many sources, which affect everyone the same, but as far as air quality goes, kids get the worst of it. According to Katy Daigle of the Washington Post, “Children breathe twice as quickly, taking in more air in relation to their body weight, while their brains and immune systems are still developing and vulnerable.” This makes air pollution a huge issue for kids around the country and globe. Is a world where the air is polluted and it’s hard to breathe a place you want for kids including myself to live in? Also from CNN, Natasha Maguder claims that traffic is one of the main contributors, responsible for up to two thirds of urban pollution. One way to prevent traffic could be to encourage less transportation by car in the country, or even making more advancements on electric cars, because not only do gasoline powered cars cause more pollution, they may become useless in a few years as the planet’s oil supply decreases daily. Some people could say that you could just build more roads to create less traffic jams, but that causes another issue that I think should be improved on: Industrialization.

Industrialization has helped our country over the years, with many technology advancements in between, but recently it has been taken too far. The human species has taken over this planet, leaving every other species left to dry. “When an ecosystem has been dramatically changed by human activities—such as agriculture, oil and gas exploration, commercial development or water diversion—it may no longer be able to provide the food, water, cover, and places to raise young. Every day there are fewer places left that wildlife can call home”, claims the National Wildlife Federation. Many people including myself visit places in this country to look at the beautiful wildlife, such as Niagara falls, or the grand Canyon. Many many years ago, the whole country was like this, but according to Justin Worland of Time magazine, the amount of trees on this planet has decreased by forty six percent since the beginning of human evolution. I imagine that number is only going increasing , and will only continue to rise, unless someone takes a stand and puts a stop to the industrial growth in our country, which I really hope will be you.

As I sit here writing this letter looking at my window, I imagine what I’m looking like now in four years from now. Will it look the same? Will there still be animals running around my backyard? I completely understand that you’re life is really busy, and that you have bigger foods to eat as President than this one letter I’m writing to you, but I hope you will at least take my thoughts into consideration. You are basically the leader of 318 million people, so I hope you realize that you could make all the difference, in making our United States a less polluted country. 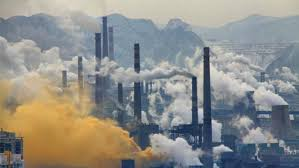 air pollution
Published on Nov 15, 2016
Report a problem... When should you flag content? If the user is making personal attacks, using profanity or harassing someone, please flag this content as inappropriate. We encourage different opinions, respectfully presented, as an exercise in free speech.
Baker ELA

Why All Political Parties Need to Work Together More

Why Democrats and Republicans Need to Work Together Dear Next President: In the following letter, I will provide extensive reasoning will be for ...

In my letter to the new president, I wrote about how pollution is affecting the earth and the sea life. Including how jobs can be changed for the b...

Do you care about Wildlife?

There is lots of pollution and trash in our water for our animals. There is a way that we can stop this. We can clean up the earth, and make it a n...

This is a short letter to the President, entailing the dangers of air pollution and how important it is for us to face this impending problem.