I’m writing to address the issue of LGBT rights. LGBT rights are an issue in America because people of the LGBT community are being abused, tortured, and tormented. I urge you to fix this problem by giving people of all genders and sexualities the same rights. LGBT teenagers are 2-3 times more likely to commit suicide than “regular kids,” according to the article “Lgbt Bullying Statistics” . Mr./Mrs/ President, please help us fix this problem.

There should be LGBT rights because all people deserve to be safe and respected since, they are just trying to live happy regular lives. It is wrong for straight people to be treated well, when the LGBT community isn’t. hey are just being the people they were born to be. According to this article,Should Gay Marriage be Legal?, “Proponents of legal gay marriage contend that gay marriage bans are discriminatory and unconstitutional, and that same-sex couples should have access to all the benefits enjoyed by different-sex couples.” same-sex couples should have the same rights.

Another reason the LGBT community should have equal rights and benefits is because many young LGBT members are being bullied, abused, and plan to commit suicide. “During 2005 the Gay, Lesbian & Straight Education Network (GLSEN) conducted a study concluding that appearance was the number one reason for bullying. The second most common reason was actual or assumed sexual orientation and gender identity. According to a 2007 study by GLSEN, 86% of LGBT youth report being harassed at school. This ratio is very high when compared to to 27% of all students being bullied at school,” because of this, many LGBT youths are more likely to commit suicide and drop out of school.

In conclusion,rights area huge issue that should be addressed. Put yourself in their shoes. Would you like to be harassed and bullied everyday for something that makes yourself you. Being bullied, not being heard, and not being treated equal is not up to America’s standard.Thank you for listening to me. Please resolve this problem.

By Reducing the Differences in Opportunities and Experiences between Gay and Heterosexual People, This Unique Culture May Cease to Exist. Lesbian Activist M.V. Lee Badgett, PhD, Director of the Center for Public Policy and Administration at the University. "Gay Marriage - ProCon.org." ProConorg Headlines. N.p., n.d. Web. 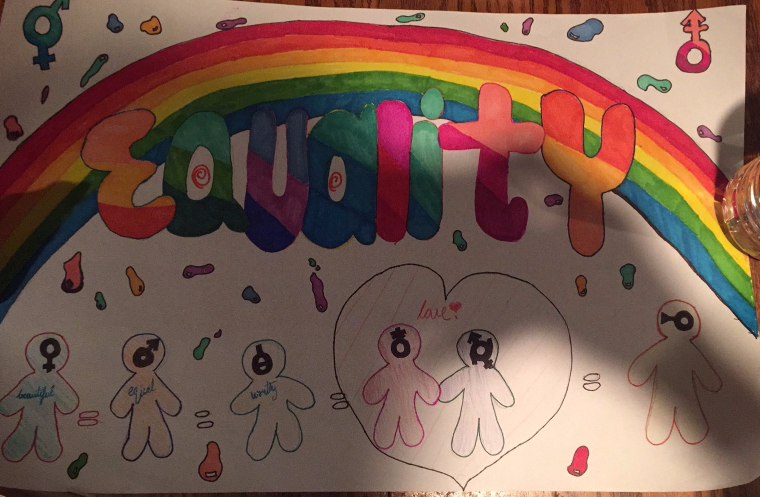 lgbtq rights
Published on Oct 9, 2016
Report a problem... When should you flag content? If the user is making personal attacks, using profanity or harassing someone, please flag this content as inappropriate. We encourage different opinions, respectfully presented, as an exercise in free speech.
Bernal Intermediate

LGBTQs are being disrespected and treated differently.