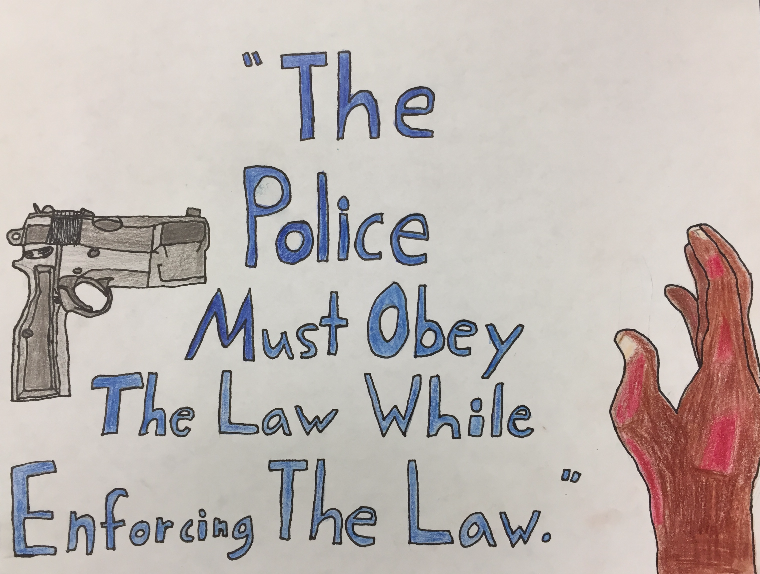 I’m writing to address the issue of police brutality and shootings in America. About 986 people were killed by police in 2015, and there were already 11 fatal shootings in 2016 by January 6. This is an issue because the majority of them were unarmed and innocent. I encourage you to distribute more body cameras for officers, and put harsher punishments in place for killing civilians.

Police brutality and racism has been going on for a very long time. In the summer of 1967, two white police officers beat up a black cab driver for a traffic violation. According to KQED, “As word of the incident spread, thousands rioted in the streets, looting businesses and prompting the deployment of several thousand police officers and National Guardsmen. The violence raged for six days, leaving 26 people dead, scores more injured and tens of millions of dollars in property damage.” Police brutality does not only harm the victim, riots could harm or kill many more. If there are harsher punishments in place, police will be more careful, and riots and killings could be avoided.

Another example of police brutality is the Rodney King case on March 3, 1991. He was pulled over police after supposedly leading them on a car chase, and the four officers severely beat him. He suffered a fractured cheekbone, 11 broken bones in his skull, and a broken leg. Rodney stated,“‘I was scared for my life. So I laid down real calmly and took it like a man’” (LA Times). The four officers that participated in the beating were charged for assault with a deadly weapon and excessive use of force. Many of them lied about how severe the beating was, and said that King’s injuries were minor. In 1992, the police officers were found not guilty, which caused major riots. Events like these could be avoided if we punish police more severely for these actions.

In conclusion, there needs to be more regulations put in place to avoid police brutality. Some ways of doing this are more body cameras for police and harsher punishments for unnecessary force. In some cases of police brutality, the officers were not charged because there was no proof. If every police officer wears a body camera while on duty, there will always be evidence if there is an assault. Also, if there are severe enough punishments, most police officers will be inclined to avoid excessive force. There is no real way to completely eliminate police brutality, but everything possible should be done to diminish it because it reinforces racism in America and many innocent families are being harmed by the actions of the police.

24, March. "The Rodney King Affair : Shortly after Midnight on March 3, LAPD Officers Converge on a White Hyundai Stopped after a Short Pursuit. Illuminated by Patrol Car Headlights, Observed by Several Bystanders And, Most Important, Videotaped from a Balcony Above, They Administer a Beating That, Three Weeks Later, Will Reverberate across the City and Nation. Here Is a Summary of Major Developments in the Case and the Resulting Controversy." Los Angeles Times. Los Angeles Times, 24 Mar. 1991. Web. 07 Oct. 2016.

discrimination police brutality race racial profiling police
Published on Oct 9, 2016
Report a problem... When should you flag content? If the user is making personal attacks, using profanity or harassing someone, please flag this content as inappropriate. We encourage different opinions, respectfully presented, as an exercise in free speech.
Bernal Intermediate

Dear Next President, Immigration reform is important to keep hard-working families together. Separating families is devastating for everyone. This ...

We need to stop an ongoing problem in our society; abortion.

Dear Future President, My name is Jade Oliver, and I live in california. I am writing you because America is raising taxes and I believe taxe...

The Future of our Energy Consumption

What happened to our Earth?

Equality and Freedom for All