Gun violence is seen throughout the country, but it peaks primarily in cities. Chicago has earned a special reputation for its gun violence over the last two years. During the fourth of July weekend of this year, sixty four residents were killed in gun related deaths. A resident of Chicago says, “You have to know the difference between fireworks and gunshots. The kids can’t enjoy themselves like they should be able to. You’re constantly paranoid.” This paranoia highlights the extent of experience of gun violence. One of the best ways to control exposure to gun violence, is to limit access to firearms. Gun control is a necessity in keeping people safe, therefore saving lives.

Each year we are faced with challenges gun violence leaves in its wake. Most notable of all, is the death toll. The amount of people affected by gun violence is too high. In the United states alone, 33,000 people are killed annually, about half of whom are children. 74,000 more people are injured every year as victims of gun violence. In total about 455,000 people are victims of gun crimes. Other effects gun control has on people is the trust in community and its citizens. “If you sit here 30 more minutes, you’ll hear gunshots. You don’t want the kids to get too comfortable because you don’t know when you’re gonna have to rush them into the house. (WSJ)” In violent neighborhoods and cities people lose trust for others and have a sense of unease around them. This forces people to constantly be on the watch for others who may have obtained guns legally but should not have them. Often this unease leads to more violence by lashing out with their own firearms to protect themselves.

Addressing the problem does not fix it. By enacting simple laws and regulations on the gun sales, we are addressing and taking a step in the right direction to safety. Why should we continue feeling the consequences of inaction when Congress cannot agree on common sense standardization of gun sales? With eighty five percent of americans supporting basic gun control measures, improvement should be emplaced politically in simple measures such as, universal background checks, and gun education. Through education at an early age no drastic measures need to be taken and countless lives, and trust restored to neighborhoods and people will benefit America politically, and socially.

Some people believe that, by definition, criminals will not listen to the law. They think enacting background checks and placing prohibitions on firearms will not stop these people from obtaining guns. They also believe this will decrease the freedom the second amendment allows us. Placing regulations on buying guns will decrease the amount of people who should not have guns from buying them. The second amendment states ‘A well regulated Militia, being necessary to the security of a free State, the right of the people to keep and bear Arms, shall not be infringed.(Second Amendment) ’ This is an outdated, confusing sentence of phrases, created before a time of current firearms.

Placing background checks in gun shows, internet transactions and in-store purchases. This keeps guns out of the hands of the mentally ill, and people who should not have guns. While it does not fit the illegal gun market, you as the next President, ensure the safety in where the majority of people buy their guns. Regulations on, magazine loads and style of weapon will make it harder to use these weapons. Placing regulations on magazine loads, and military style weapons does not undervalue the second amendment rights. Better education on gun safety, and knowledge will educate people, and children on the potential danger of guns, and respect guns deserve. "Guns are very much a part of our society and for parents to not address children's natural curiosity about guns is a mistake, (Bronikowski)." With growing importance and controversy in our lives over guns letting parents, and children education on gun will help lower to death toll from accidental shootings at home. With straightforward education on dangers, training, and preventive measures we could could save about 3,000 deaths of children 17 and under at home (Gun violence archive).

Gun control is does not constrict our basic american rights, yet keep us safe. Enacting on background checks, to keep firearms out of the hands of criminals and the mentally ill, only protect the american population as a whole. Introducing widely supported ideas will appease and conserve our citizen’s lives. With 306 people injured per day, we need to take steps in the right direction to prevent ninety deaths and 159 people shot in assault per day (Brady Campaign). You as the new president have the ability to make a difference in gun violence across the country. 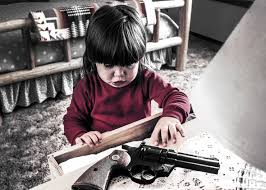 gun education violence death toll gun issues
Published on Oct 19, 2016
Report a problem... When should you flag content? If the user is making personal attacks, using profanity or harassing someone, please flag this content as inappropriate. We encourage different opinions, respectfully presented, as an exercise in free speech.
Orange High School

The Gun Control : Illegal Guns On The Street

Dear Next President, I am wri...

The gun violence in America needs to stop. The future president needs to make sure that there is more background checks and protection.