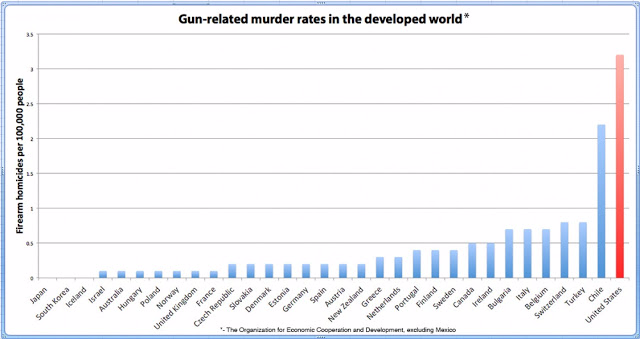 Throughout the past decade and a half, there have been 464,033 deaths due to gun use. According to the New York Times, the death rate from gun homicides is about 31 per 1,000,000 people. “That’s the equivalent of 27 people shot dead every day of the year.”

Some people may say that the use of guns is needed in order to protect yourself, but according to ProCon of the 29,618,300 crimes committed, only 0.79% of victims used a gun for self defense. The fact is, if a gun is not used for self defense, the only other use for it is to take someone’s life. Why have them out there, ready for public use if it’s not necessary.

On June 12, 2016, a man walked into a nightclub with an assault rifle and a pistol and shot 49 people dead and injured 53 people. Were that person to have walked in without a weapon, he would not have been able to do nearly as much damage.People might say that it’s the person that kills, not the gun, but a person with a firearm could do far more damage than someone without a weapon.

People use guns as a means of self defense against other people with guns, but if the criminals didn’t have guns to hurt you, why would they be needed. The only purpose of a gun is to kill, whether it is used in self defense or to commit murder. Either way, a life will be unnecessarily taken. Why should any person have the power to end somebody’s life so easily, let alone a criminal.

By adding stricter background checks to keep guns out of the hands of criminals we could lower the amount of deaths from gun violence. With the proper laws and restrictions put forth, you could change the lives of many families who might be hurt or killed by guns.

violence
Published on Oct 7, 2016
Report a problem... When should you flag content? If the user is making personal attacks, using profanity or harassing someone, please flag this content as inappropriate. We encourage different opinions, respectfully presented, as an exercise in free speech.
Weddington Middle

Education in America isn't what it used to be.

How to reduce gun Violence

Gun violence are problem in America today we need make laws to solve this problem.

Dear Next President: What effect does gun violence have on teenagers in the United States? The data on this infographic is chilling. What will you ...