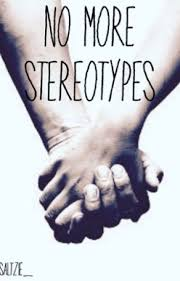 In today’s society, stereotypes are a big part of our everyday lives. It affects not only teenagers but also adults. Stereotypes can go from physical appearance to your personality. Discrimination is just an excuse for stereotypes.

It is really sad to see how much this affects someone. For instance, if a male has high voice or a sense of style that makes him gay right? Not every male has a deep voice that is straight or not every male that has a high voice is gay. Same with girls. If a girl is masculine or athletic that automatically makes her a lesbian? No it doesn’t. I see that happen almost every day and it is not right .

I remember when i was 8, I wanted to have a superhero party. At that time i didn't understand at the time but now i do. I'm wasn’t supposed to be playing with superheroes, I was supposed to play with Barbie dolls. I was the complete opposite of what was expected. When someone would ask me what i wanted to be when i grow up, I said spider-man. The look on their faces is a look i will never forget. They were disgusted with me. Then my parents finally explained to me that superheroes were for boys. I was never the same little girl.

We need to stop the racism and the stereotypes. It doesn't help anyone. Stereotypes are useless.

stereotyping equality
Published on Nov 9, 2016
Report a problem... When should you flag content? If the user is making personal attacks, using profanity or harassing someone, please flag this content as inappropriate. We encourage different opinions, respectfully presented, as an exercise in free speech.
John Henry Francis Polytechnic High School

Since I started school I was told, that in the future, I should to go to a good college and get a well paying job. However, with the cost of colleg...

Government should provide us with more jobs and increased wages.

The welfare system is broken and needs to be fixed.

Are students really getting the help they need?

The fight for LGBT RIghts and equality.

This letter is addressing the issues concerning the negative stereotypes and other mistreatment by which immigrants face upon entering the country....