Dear future president, I think that stricter gun laws should be implemented to restrict the amount of guns people have.

"The research on this is overwhelmingly clear, no matter how you look at the data, more guns mean more gun deaths." This statement, is followed by a graph, of the data they are referring to. 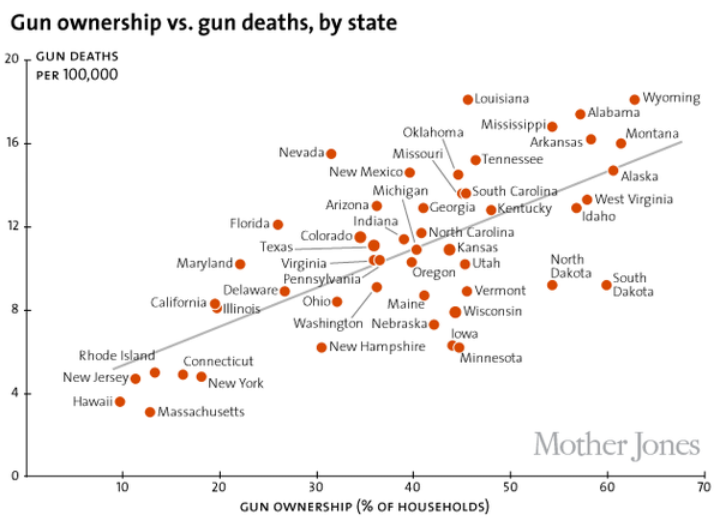 Some statistics about the amount of guns in the US could correlate higher gun violence, in fact, "The United States has about 88.8 guns per 100 people, or about 270,00,000 guns."  Using this information, paired with the fact that more guns mean more gun death, we should be more worried. Also, perhaps making it harder to obtain firearms may lower the shootings, by keeping guns out of the wrong hands.

Some sources may say that gun control isn't a problem, but this fact is a reason we should try to find a solution, before more people get killed. "There were a total of 464,033 gun deaths between 1999 and 2013: 270,237 suicides, 174,773 homicides." This is a problem to consider, and we will hopefully find a solution to in the near future.  The same article says that guns are the leading death by homicide.

That is why I think we should consider gun control a problem worth figuring out the answer to. Perhaps, adding more gun control would be the best option. Thank you for listening, Mister or Miss president.

gun issues
Published on Nov 29, 2016
Report a problem... When should you flag content? If the user is making personal attacks, using profanity or harassing someone, please flag this content as inappropriate. We encourage different opinions, respectfully presented, as an exercise in free speech.
Craig High School - Ms. Tucker's English 9

Should NCAA Athletes Get Paid?

I think that college athletes should get paid due to the amount of time and effort that they put in.

College Prices are too much Money

College is too Expensive

Orphans in the world

Orphans are not just a problem in the U.S but the whole world.

college tuition is way too high and should be lowered.....

To try to research and find a cure for cancer.

We should have more strict background checks and regulations due to all the shootings.

guns are good for self defense

guns are good for self defense so don't take guns away.

Gun Control will be extraordinary to us. It will help our future become a better and safer place.