Congrats on coming into office. I hope you enjoy your time there, whether your time be for 8 or 4 years. I am a freshmen in high-school of the state of Missouri, and want to bring light on an issue I would like to make you aware of. The issue on human rights and values. Back in the 1960’s people were discriminated due to their color. Now, in 2016, we still have the same problem but it's not just about color anymore. It includes but not limited to homosexuality, disability, height, weight, or even being democratic or republican. In our world we neglect, abuse, and perform inhuman activities constantly. Just because of one’s ethnicity, sexuality, characteristics, genetics, or ideas. Commonly this is produced by the naive thoughts of non-existing equality among us. But in reality this is a boundary we must surpass. Recently in a YouTube video, they tested the american people of our society by having a fake blind man ask for change for a five dollar bill, but really (on purpose) gives out a one hundred dollar bill. Most of the people who were asked, thought it was OK to take the one hundred bill and give back the change for a five dollar bill. One man didn't even give back the change and left. Basically, the video is showing that people are taking for granted the disadvantages of a blind man, and it's not just them. Other people get treated poorly everyday due to disadvantages they may possess. Although it seems to be as if it’s fine and nobody is getting hurt, doing things like this to people with disadvantages is ignorant and inhumane. The big picture is that humans will be humans; selfish and loving, unfair and fair, and careless and careful in the way they view people.

As people travel the straight highway of the normal , we travel the rigid winding of dirt back roads. The road of name calling from retarded to racist slurs that divide us. The world can not hide us from the mistreatment we face. Globally to this day, people believe that their remarks and actions do not affect people mentally, physically, or emotionally. According to an info-graphic from American Institute for Research (AIR) that sources indicators of School Crime and Safety: 2014, National of Education Statistics, U.S Department of Education and Bureau of Statistics, Office and Justice Programs, and U.S Department of Justice inform that hate crimes that were committed on campuses are majority because of race for vandalism, intimidation, and simple assault all sitting above 40%. Also, majority of the cause of these crimes are caused by sexuality orientation and religion together making 33% of the cause behind these hate crimes. There were nearly 800 crimes being committed in the year of 2012. School crime safety helps us see that these types of things are even happening in our campuses. This is the place where we learn about the outside world. If people are already devastated, then what kind of state of mind will you leave a person when they graduate? The American Institute of Research is basically urging the world to see what is being done. Committing a hate crime and having the state of mind to commit the crime is not necessary to live. It is a bad habit people have learned. A baby does not come into the world and immediately hate, they have to develop those opinions. This is why we need to crack down on these types of actions more than we have been. If not, this will grow out of hand and then there will be no way that we can help the victims of these crimes. Thus, all leading back to the naive thoughts that people think they are better than others. Overall this is a repeating issue. Of course there will be the people who will have the argument that no harm is being done and why should we stop and help other people when we all have lives of our own to live. But do they of all people know what it's like to live this way. To be ridiculed because of race, disorder, and even sexuality, the list goes on and on. But apparently they know the feeling. The last thing is that i would like to thank you today for reading and considering what can be done to help the nation we live in. 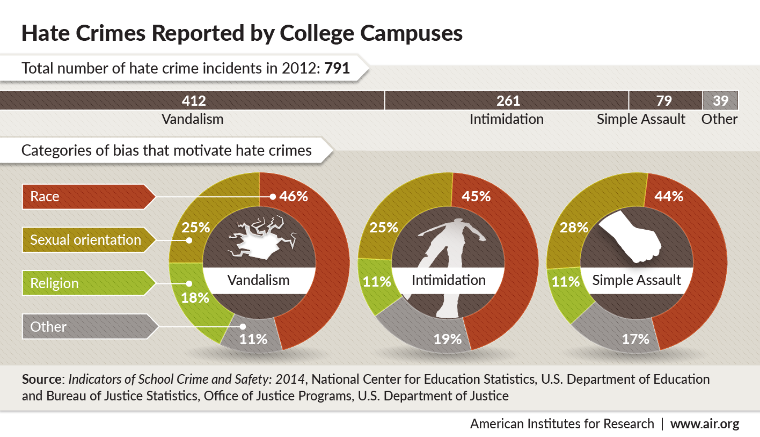 discrimination hate crimes human rights
Published on Nov 8, 2016
Report a problem... When should you flag content? If the user is making personal attacks, using profanity or harassing someone, please flag this content as inappropriate. We encourage different opinions, respectfully presented, as an exercise in free speech.
Frontier STEM High School

Being undocumented isn't easy. Its hard to be in a world were they judge you for someone you're not. Try an imagine yourself in a immigrants shoes....

Families should not have to be separated due to deportation. It causes a long lasting harming affect on a child's life.

Immigration needs to be controlled.

The Problem of Sleep

Teens aren't getting enough sleep, and we need to change our school start times to remedy this deprivation.

Immigration is a great thing with the right processes and opportunities, and through that we could make America great again!

ISIS Needs to Be Stopped

How we can stop Obesity in America

This letter is about police brutality and the use of excessive and/or unnecessary force by police when dealing with civilians.