I am a teenage gamer, and I have a problem that I feel is worthy of bringing up.

Kills with the annihilator can’t turn you into the Terminator.

It makes sense that Alexandra Sifferlin would say this because I’ve experienced increasing aggression within myself, and have even seen it in others, but I’ve never witnessed any crime related actions because of violent games. Basically, Alexandra Sifferlin is saying that gamers can be easily irritated by losing over and over, to the point where they start to have increasing anger towards anyone around them. However, violence can relate to violent video games because of the sense of realism in violent video games can make a gamer wonder what it’s like to kill in real life, which is why people believe teens can be easily influenced by violent video games.

According to ProCon.org, Violence such as shooting guns and fighting in video games can cause real life violence in teens. Many of mass shooters and school shooters played violent video games.

Recently, in 2012, school shooter Andy Lanza (who was diagnosed with Asperger’s Syndrome), murdered 20 children along with staff members. His parents said that his hobby was playing Call of Duty, which is a violent video game that revolves around killing with guns, which he did. This happens often with teenage school shooters, they often play violent video games. According to Healthline newsletter, 91% of teens and younger kids play video games, and 90% of video games portray violence.

I could say that we can't sell these games to people who are Autistic, or have some other mental disorder, but I disagree with that decision because not every Autistic or mentally ill person will start to become violent from playing these games. But we need to keep in mind that people without mental illnesses can still be mass shooters.

Thank you for reading, and to close out this paper I want to ask you, how does violence in video games relate to violence in real life, and what can we do to make sure the right people are playing these games? 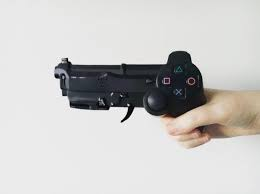 video games violence
Published on Nov 8, 2016
Report a problem... When should you flag content? If the user is making personal attacks, using profanity or harassing someone, please flag this content as inappropriate. We encourage different opinions, respectfully presented, as an exercise in free speech.
Frontier STEM High School

The number of family farms in the U.S. has decreased in the past years, this needs to change.

Letter To the Future President

This is a letter to the president addressing the big and evolving issue of Discrimination and civil rights.

This shows my view on Abortion and what I think should be changed to make it less controversial.

Violence is a threat for teens and our communities. Many people lose their lives most of them are innocent. not everything can be solved by violenc...

Lack of gun control in the USA is an exponential issue that screams for proper attention. Some of the true statistics of this current conflict have...

My letter is about gun control. Specifically that people with registered guns aren't causing the problems, We promote too much violence through med...