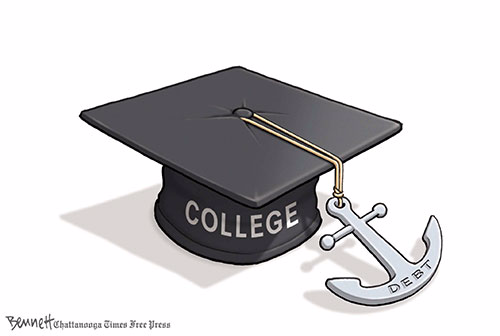 College is practically a necessity for a good and stable job in the future. People tell us to get a college and get a degree to succeed in life, but how can we do that if we can't even pay for college? Student debt is a huge problem in the United States. And it’s only getting worse; to show this, an article on U.S News says that, since 1995, “tuition and fees at public National Universities grew... increasing a staggering 296 percent” (Mitchell). This limits who can go to college and who can't. This needs to fixed. I think we should create a tax to alleviate the cost of college, at least for families with a yearly income of less than $30,000.

Now some people might argue that it costs too much, or is unnecessary. but it costs more to pay for federal student aid than it would for free four year college. this is proved by an article on U.S. Uncut that states "America’s public colleges and universities collected $62.6 billion in tuition from students... This means that, hypothetically, allotting $62.6 billion per year (adjusted for inflation) toward public universities and colleges could solve the student debt crisis entrapping entire generations... the U.S. government ironically spends $69 billion on federal student aid programs like Pell Grants" (Gibson). That's $6.4 billion dollars more than the government needs to pay. And as for the need for free tuition, most students are in debt. For example, one article states that “70 percent of students graduated with student loans"(Powell). this shows that almost all students are in debt.

College should be for everyone, because it's going from a privilege to a necessity. But college isn't for everyone right now. Most students graduate with loans. as I stated before, 70% of college grads were in debt, but by how much? The same article mentioned before also claimed that  "the average 2016 grad holds $37,172 in student debt” (Powell). And that number keeps rising. This further proves that most students are in debt, and that debt is a substantial problem.

This is a problem that can be fixed easily. Free college will cost about $80 billion over ten years. Now, that seems like a lot, but its shown that isn't by a Facebook post stating “it would cost the average American taxpayer $33/year” (Gibson). that's the cost of a cheap meal at a small diner, and its money I'd be willing to pay for free college. The article  also said "8 months of the Iraq War is technically $175.2 billion, which is more than double the $80 billion figure the commenter estimated"  (Gibson). that means that if we spent half the money we spend on war, we could pay for an entire nation's education. $33 is not a lot of money to spend for getting our future workers a higher education. A college degree is a huge key and benefactor to a successful job and life, jobs that need filling. Because we are this nation's future. And yet, we can't even get most of the jobs out there, since we can't afford the necessary education.

In short, college debt is a huge problem with a simple solution: add a tax to pay for 4-year college tuition instead of paying for student financial aid programs. It's a solution that will not only save billions of federal dollars, but also give good jobs and good lives to an entire generation, and all the generations after. You don't have to make America great again, just make it affordable.

Deportation Should Not Be An Option.

Deporting immigrants can separate families which hurts children most and who would want that?

The cost of college makes it more difficult for students to continue their education.

High College Costs and It's Effects

I believe that the cost of college should be lowered or it made free due to all the lasting effects the high prices leave graduates with.

Although a college degree is almost required to be successful in today's day and age, many youth cannot afford the cost or will be saddled with hug...