Hey, nice job in winning the title of President! You must be very proud of yourself, but before you kick back and relax before getting to work, I want to discuss something with you. I’m writing to address the issue of bullying, and I feel like this issue needs much more paid attention. People may not know, but bullying is a very serious situation that people, mostly students, deal with. Actually, bullying is one of the biggest problems in the student society. It leads to other unwanted problems such as suicide, depression, non-graduation because of absences, lack of determination in school because it is brought down by the bullies, as well as after-school difficulties. For the success and the strength of students, I ask that people, specifically adults and bystanders, pay more attention to bullying and its effects. And whoever you are, Future President, I want you to be one of these people.

Based on dosomething.org, each year, around 3.2 million students are bullied each day. 17% are American students that are picked on 2 to 3 times a month or more in one semester. Self harm is also triggered through 30% of these students. And what’s more serious, about 10% have already tried to commit suicide, some even succeeding in taking their life because of bullying. Apparently, according to bullyingstatistics.org, “In several cases where bullying victims killed themselves, bullies had told the teen that he or she should kill him or herself or that the world would be better without them.” Victims of bullying are usually motivated to kill themselves by their own bullies, saying false things about the victim. Bullying also affects school work, and is one of the reasons why graduation rates have gone down. Sometimes this is caused by lack of attendance, in which, according to antibullyingpro.com, about 160,000 of these victims stay at home at the fear of the bullying that awaits them at school. Other times it involves their self esteem. Around 83% of students say that bullying brings down their self determination and helps them get unfocused from their work and projects. Bullying can cause all of this to happen, yet no one really pays attention to it.

Bullying effects don’t stop after you walk off the graduation stage. Honestly, I’m not even sure many victims managed to walk across the podium, shake hands with the principal, and receive their diploma, due to many of them hiding at home afraid of bullying and making a huge absence chart. In the future, victims of bullying may be affected a lot, whether it’s getting a job or for their health. I actually didn’t know this before, and discovering this has only made me much more determined to stop bullying. According to antibullyingpro.com, victims of bullying are twice as likely to have a hard time keeping a good job or save money then people not involved with bullying. Plus, people who have been bullied have a higher risk of health problems during adulthood and are more than 6 times likely to be diagnosed with illness or disorder than those without problems from bullying. Whether you’re surprised about this or not, I sure am. And I’m pretty sure, future president, that if you joined the elections, surely you must have cared for our country and wanted to make sure that it is healthy, employed, and strong, and in this case, bullying is probably in your way. I hope that you’re realizing that bullying may be a bigger enemy than you thought it might be, and that you need to help protect the present and the future. I just wish that more adults would pay attention for this crisis.

Have you ever seen any of those movies, where the main protagonist is bullied? Usually, the movie ends him or her telling an adult, and everything works out in the end. The principal is told, the bully apologizes, they become friends, you know, all of that cliched stuff I’m not going to bother listing. In real life, of course there are situations that can be resolved with just a simple word to an adult. But it’s not as simple as it seems. When told about bullying, parents immediately respond with the most common answer - just ignore them. In some cases, I do admit that it does work. However, ignoring isn’t the number one solution to any bullying case. Sometimes I feel like adults never take bullying seriously. Even though bullying affects millions of students and worries everyone, especially those close to the victims, adults and teachers usually don’t understand how serious bullying can get, because they are never there to witness it themselves. According to dosomething.org, “1 in 4 teachers see nothing wrong with bullying and will only intervene 4% of the time.” which shows how little adults pay attention to bullying, whether they try to or not. I have already experienced bullying myself, and my mother’s first piece of advice to me was, “Just ignore them.” Yes, I tried to follow her advice. Yes, I failed. Yes, I suffered miserably at the hands of one single person for around 3 years until I practically slapped my hands on the table and said, “Enough is enough! I need you to help me, NOW!” When they found out the situation was much more serious than they thought it was, my mom had a talk with his dad, and it all blew over. I’m happy now, but I know I’m just one of those few people that actually managed to get their parent to understand how serious bullying was. I want other people, including you, future president, to recognize bullying easier and do something, something, to HELP US.

I’d like to thank you for taking precious time from your possibly busy schedule for reading my letter (which, I’m not even sure you’re going to...but I hope so!). Whether or not you read this letter word for word or skimmed through it due to the fact that I can ramble a lot, I hope that you get the point of this letter. Bullying is the cause of so many problems in society. It is the reason behind depression, suicide, possible school problems, job and society situation as well as health issues. You were elected to make things better for our country. I suggest you take action now and help victims all over the world have a better future.

Thank you and goodbye, 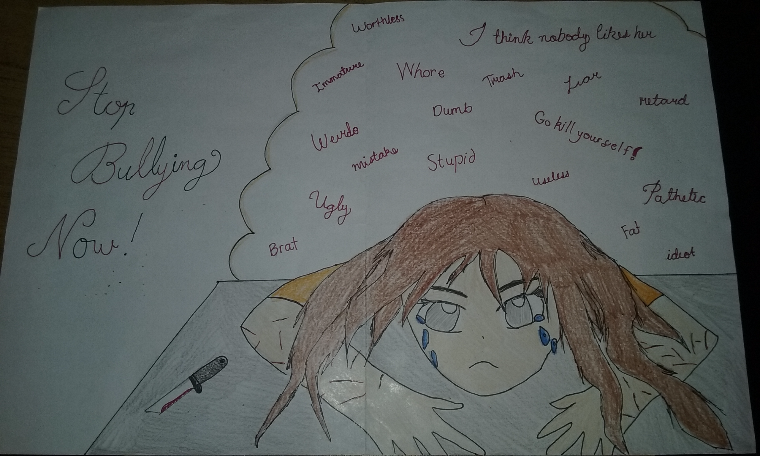 Student of California and Citizen of the USA

Website Title: KidsHealth - the Web's most visited site about children…

Author: By age 14 less than 30% of boys and 40% of girls will talk to their peers about bullying.

Article Title: Facts and statistics on bullying and cyberbullying

teen suicide bullying suicide health depression
Published on Oct 9, 2016
Report a problem... When should you flag content? If the user is making personal attacks, using profanity or harassing someone, please flag this content as inappropriate. We encourage different opinions, respectfully presented, as an exercise in free speech.
Bernal Intermediate

Marijuana Should Be Legal

Marijuana should be legal because people need it for medical reasons.

The cost of education and lack of financial aid for low income students.

Free Health Care for all?

I believe that the health care should be free for at least low income families.

Bullies bully because they were bullied

An essay on teen suicide

Work Together To Prevent Teen Suicide!

Choose every moment inlife wisely, don't fall into a dark path. Shine light for others who can't find hope. Listen to those who need to talk, don't...