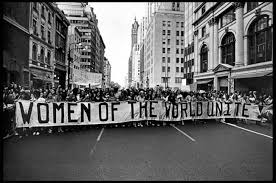 Women’s rights are a topic of importance to me because I am woman. My generation will be deeply affected by the choices that the president makes. Around the world there are women who are treated extremely unfairly. Some are not even allowed to leave their homes. Even here in the US we face gender inequality in job payment. Many women are not payed the same amount as men for doing the same work. For me, as a woman in our society, it is a necessity that these issues are addressed. I do not want to live in a world where at times because of your gender you are not treated with the respect of being an equal human being to men. I hope that the following issues will be addressed during your presidency.

First and foremost, many women across the world are not treated equally to men. According to The Washington Post, in Yemen women cannot leave their house without their husband's permission. This is unacceptable and violates women's rights. Additionally, according to The Washington Post, in Saudi Arabia women cannot drive. This is a very disrespectful law because it treats women as if they are children. Also, even here in the US women are not treated with the respect they deserve. The Institute for Women's Policy Research states that, “In 2015, female full-time workers made only 80 cents for every dollar earned by men, a gender wage gap of 20 percent.” Our country has come so far with women’s rights and the fact that women are still getting payed less then men is extremely disconcerting. These facts should help persuade the government to refrain from continuing to disregard women’s rights of equality in our nation.

I want you to make women equals in our society. In the US, you have the power to end the pay gap between women and men and finally overcome gender discrimination. Even concerning other countries, you have the power to make a difference. The US is a powerful force and influence in the world and I hope that you use your power to give women the rights that they deserve in other countries. Women around the world deserve the rights that every man is given. I hope that you will do your best to fix problems in the US and around the world, and deliver basic rights and freedom to all.

women's rights women empowerment
Published on Nov 7, 2016
Report a problem... When should you flag content? If the user is making personal attacks, using profanity or harassing someone, please flag this content as inappropriate. We encourage different opinions, respectfully presented, as an exercise in free speech.
Baker ELA

This essay is about the development of Cancer and how it needs to be cured.

What Can be Done About Gun Violence

Many girls think they are not good enough because they grew up with the idea that being "like a girl" is bad.

Women are always blamed for the horrific conditions they have been through and often fear to tell others their situation. In my letter, I explain w...

A letter from a frustrated young woman demanding social and political equality for an entire gender that has been trampled on since the dawn of civ...